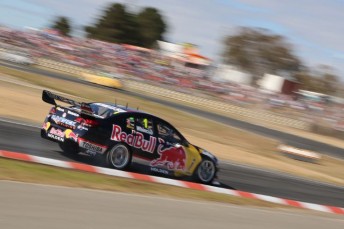 Whincup moved to the top with a 51.19s on the final lap of his first run, a time that remained fastest as he sat in pitlane for a full 10 minutes before re-emerging.

A brief second run yielded a slight improvement to 51.11s, which proved enough to secure his first pole of the 2013 season.

Lowndes had sat second with four minutes to go but was bumped down the order as he sat in his garage, his team unable to complete a late set-up change in time for a final run. Shane van Gisbergen was lucky to escape an early spill

Van Gisbergen meanwhile enjoyed a lucky escaped in the opening stages as he managed to reverse out of the Turn 4 gravel after a mistake under brakes.

Had he become stuck, the double Adelaide pole-sitter would have almost certainly been consigned to a rear-of-grid start.

James Courtney managed to drag 13th out of a difficult session that saw the #22 Holden Racing Team Commodore spend considerable time in pitlane with its bonnet up.

The 2010 champion will share row seven with an impressive David Wall, who ensured that all three Brad Jones Racing Holdens will start in the top half of the field.

Lee Holdsworth was again the fastest of the Mercedes entries, but failed to repeat his encouraging seventh from practice and will start 21st.

Todd Kelly managed just one place better in the best of the Nissans.

Maro Engel will start from the back of the field after a five-place grid penalty for an incident with Michael Caruso’s Nissan during practice yesterday.

Race 3 of the championship will be run over two 60km legs with a 15 minute service break in between. The second leg will recommence with a double-file restart.