Erebus Motorsport may be braced for tough weekends at Symmons Plains and Pukekohe, but the Mercedes AMG customer squad has a clear plan in place to be a serious threat by the V8 Supercars Championship’s marquee endurance races.

At the heart of the team’s development schedule are two stages of engine upgrades, the first of which could be on track as soon as the fourth event of the championship at Barbagallo in May.

The car’s current induction system is understood to be the focal point of the first overhaul.

An eight-butterfly manifold, as seen throughout the remainder of the V8 Supercars paddock, will replace the current AMG SLS GT3-derived set-up, which has proven troublesome in the rapidly designed Australian cars.

A mechanical throttle is also under development after a V8 Supercars backflip on allowing AMG’s preferred fly-by-wire system.

Erebus team manager David Stuart, who joined CEO Ryan Maddison and car #47 race engineer Wes McDougall on a trip to HWA’s headquarters in Affalterbach, Germany, in the lead-up to the Symmons Plains event, emphasised the importance of a structured development process.

“We’ve got a short, medium and long term development plan,” he confirmed to Speedcafe.com.

“We’ve ticked off most of the short term plan, which has basically consisted of going from one end of the car to the other and looking at everything we can improve. 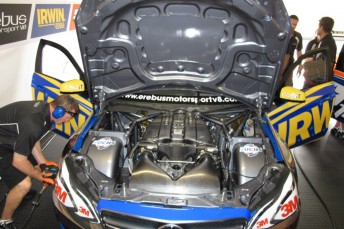 “Our medium term plan involves some things that we’d like to try potentially for Barbagallo, and that will really dictate the next stage of development, which we would hope to have by the endurance races, if not before.”

That “long term” stage appears likely to include a host of mechanical upgrades that will need re-homologation with V8 Supercars prior to their introduction.

Meanwhile, the team’s Symmons Plains campaign got off to a difficult start yesterday when its three drivers causing the only three red flag periods during practice.

Lee Holdsworth suffered from steering and electrical issues throughout the day, with his car coming to a halt on the circuit in Practice 2, while Tim Slade and Maro Engel found trouble at the Turn 4 hairpin in Practice 2 and 3 respectively.

Engel’s incident saw the German make contact with Michael Caruso’s Nissan after the SP Tools-backed driver misjudged the speed difference between his soft and the Norton Altima’s hard tyres. Engel was subsequently handed a five-place grid penalty ahead of today’s opening race.

According to Stuart, putting in a reliable showing both this weekend in Tasmania and next weekend in Pukekohe, New Zealand, is the main objective.

“We came into these two race meetings knowing what we had and we’ve got to have small goals,” he said.

“We had cars not finishing races at the Grand Prix, so if we can have all three cars finishing this weekend that’ll be another step forward.”

The V8 Supercars will hit the track for Practice 4 at 0935 this morning ahead of qualifying at 1150 and the two-part Race 3 of the championship at 1445.