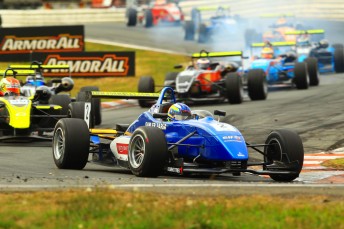 Tim Macrow has completed an all-but perfect Saturday at Symmons Plains Raceway in a championship recovery drive that has returned him to title contention.

The Team BRM / Gawler Farm Machinery driver scored pole position, two race wins, a lap record and a fastest lap in day of domination by the 2007 Australian F3 Champion who scored zero points at Bathurst one week ago.

It was an emphatic return to the top for Macrow, who today scored his 50th podium and 20th career victory this morning in race one – and also climbed to fifth in the standings just seven points behind new series leader, Nathan Morcom.

Aside from missing the bonus point for the fastest lap in race two, Macrow’s day was statistically perfect and rockets him up the championship standings ahead of tomorrow’s 18-lap feature.
He also set a new class lap record (50.32s) in race one, and a qualifying record (50.18s) earlier in the day.

“Our objective from here is to go and win every race, get every bonus point for pole or fastest lap and do what we can to get back in the hunt after last weekend,” he said.

“We’re on the back foot and we have to win as often as possible to get back in the championship. Today has been just about perfect and it’s a testament to Team BRM and how good it’s all going so far.
“The car was awesome, the team is awesome and I just can’t fault it.”

Ahead of tomorrow’s feature race, series leader Nathan Morcom (33 points) and seventh-placed Nick Foster are split by just eleven points. 20 are up for grabs in the main race this weekend.

Meanwhile, race two this evening was called slightly short after an incident between John Magro and Ben Gersekowski saw the #3 Team BRM / FNQ Larger Dallara tipped over in a dramatic rollover at turn six, in a lap 13 incident.

Both drivers emerged unscathed and it looks likely both will race tomorrow. Due to the red flag results revert to the conclusion of the 12th lap, which means both drivers score solid points regardless.

An outstanding drive from Formula 3 rookie Jack LeBrocq showcased the capabilities of both the reigning Australian Formula Ford champion, and his new Erebus Academy Formula 3 team.
The Victorian driver qualified his Mygale M08 – Mercedes Benz chassis fifth and raced to third in the opening race.

He ran second for much of race two before a big dive by Guiliana saw him relegated to third – the same place he will start tomorrow’s feature – but he was competitive throughout and pressured Macrow for the lead on the race restart.

LeBrocq also sits third in the championship standings ahead of tomorrow’s feature.