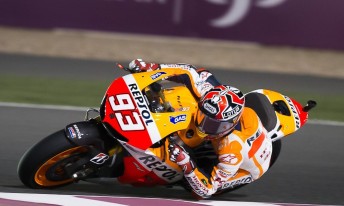 Honda debutant Marc Márquez has topped both Friday practice sessions for the Qatar MotoGP and the line-up for the new Qualifying 2 system has been established.

The replacement for Casey Stoner beat Jorge Lorenzo (Yamaha) by one thousandth of a second at the Losail Circuit.

As for from 2013 onwards, the first three of four MotoGP practice sessions have a direct bearing on Qualifying. For this reason, there was much tension in the bottom half of the top ten as riders strived for a place in Saturday’s pole position shootout.

Britain’s Cal Crutchlow comfortably sealed a Q2 placing with third spot for Monster Yamaha Tech 3, as Lorenzo’s teammate Valentino Rossi was fourth on his return to Yamaha Factory Racing. Shooting into the top five in the late stages was Andrea Dovizioso on his first Ducati Team weekend, with Repsol’s Dani Pedrosa having struggled for front end grip since the start of first practice but still securing a Q2 effort with sixth.

As track conditions improved towards the end of third practice, a dramatic battled raged while riders continued to push rivals out of the top ten. Álvaro Bautista went seventh for GO&FUN Honda Gresini as the times suddenly became the tightest they have been all weekend. In eighth spot was Nicky Hayden on the second Ducati Team bike, with British rookie Bradley Smith impressing on his first outing by achieving ninth for Tech 3. Stefan Bradl looked to have a challenge on his hands as the times came down, but snatched back tenth for LCR Honda MotoGP.

Ninth tenths of a second separate the top ten – a group in which may of the riders are split up by margins of just thousandths of a second.

At the end of Q1 on Saturday, grid positions 13 and downwards will be decided. However, the fastest two riders will be promoted to Q2, making for a final top 12 contest. Judging by the latest form, it looks as though that battle will be between Pramac pairing Andrea Iannone and Ben Spies, plus Power Electronics Aspar’s Aleix Espargaró on the leading CRT machine; the trio end Friday in positions 11 to 13.

Australia’s Bryan Staring on Gresini’s CRT bike was 21st of the 24 riders.