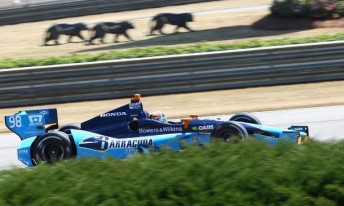 Team Penske appears set to continue its domination of the Barber Motorsports Park circuit in Alabama after Helio Castroneves cracked the best practice time for round two of the IndyCar Series.

All 26 cars were under Castroneves’ pole time from last year with the Brazilian’s best practice lap returning a 1:08.5540s tour.

Veteran open-wheel racer Alex Tagliani was next best in his Bryan Herta Autosport Honda ahead of the rookie Tristan Vautier who edged out his Schmidt team-mate Simon Pagenaud to be third quickest.

Aussie Will Power was fifth fastest in his Chev-powered Dallara with the Penske team also fielding a third entry this weekend for former Champ Car top gun AJ Allmendinger who was eighth fastest.

Tagliani said it has helped having a pre-season test at the Barber circuit.

“I am really proud of what the team has accomplished this weekend,” Tagliani said.

“These tyres are different (from 2012). We also had a chance to test here and the team came prepared.  We had a little issue this morning but they fixed it in between and we are back where I think we belong.

“Also, I know that Honda did a fantastic job. Everybody was putting a lot of pressure on them in St. Pete but with a company like them, when they feel they need to step it up, they can always do it in a very short time.”

Power, originally from Toowoomba west of Brisbane, is a two-time winner at the Barber circuit.

New team-mate Allmendinger is certainly one to watch after returning to the single-seaters after recording five victories in Champ Car in the mid 2000’s.

“For me, it’s just a process. Just trying to learn how these weekends go and try to keep up with the race track as it changes,” Allmendinger said.