Coulthard, Whincup and Winterbottom on the podium

The Lockwood Holden driver started and finished the opening 60km leg second to Jamie Whincup, before diving underneath the Red Bull Holden on the second lap of Leg 2.

Coulthard’s victory was initially provisional with race officials investigating a report of a restart rule breach from the Kiwi. A post-race investigation found that no breach had been made.

The much hyped double-file restart was free of carnage at the front of the field, with only the Lucas Dumbrell Holden of Scott Pye finding trouble deep in the pack.

Coulthard had to survive a Safety Car restart with six laps to go and sprinkles of rain in the closing stages before taking the chequered flag.

Whincup crossed the line 1.1s adrift of Coulthard in second, later noting that he had made an unhelpful set-up change during the 15 minute service break between legs. 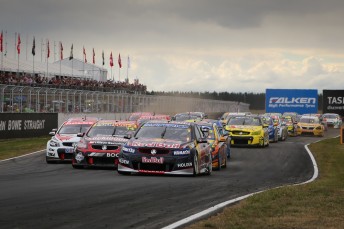 Whincup led the field away for the double-file restart

Bright and Tander engaged in some panel rubbing during the opening leg, with Bright lucky not to sustain damage when contact on the back straight momentarily lifted his right-front wheel into the air.

Craig Lowndes was classified just 26th after a clash with Shane van Gisbergen on the opening lap of the first leg punctured a rear tyre on his Holden, sending him into a spin.

Lowndes’ issues, which also included a troublesome gearbox, have allowed team-mate Whincup to take the points lead after three races, with Will Davison moving to second.

Todd Kelly failed to take the start of Leg 2 after a power steering failure while Maro Engel was also a DNF, causing the late Safety Car with an off at Turn 4.

Engel’s Erebus team-mate Lee Holdsworth was also in the wars, spinning at Turn 2 after a tap from James Moffat in the Lowndes-induced melee. The IRWIN Mercedes eventually finished 23rd, with the incident to be investigated after the race.