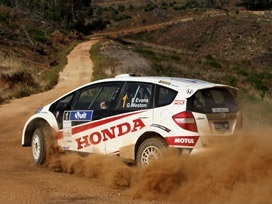 Eli Evans has steered his Honda Jazz to victory in the opening heat of the Quit Forest Rally outside Busselton in Western Australia.

On a day when others had plenty of issues, Evans who managed to steer clear of the problems that befell his rivals to win the Heat by 44.7 seconds.

“In all fairness we had a good run while others hit problems,” said Evenas.

“The problems the other guys hit certainly made today easier for me but I didn’t let up my pace at all and pushed hard throughout.”

Evans’ only major rival during the course of the day was local Tom Wilde in a Renault Clio. Despite the 44.7 second gap at the end of the day Wilde held off a late charge from team mate Scott Pedder.

“I think we all knew Tom would be quick on these roads, he’s a local after all and he knows how hard to push on the slippery surfaces,” said Pedder.

For Pedder it was a day of what could have been, with a puncture six kilometres from the end of the morning’s second stage costing him dearly.

“I definitely hit lots of stuff today,” laughed Scott in explaining the flat. “But where we got that flat tyre I can’t think if there was anything in particular, it just started to go flat and it cost us easily over a minute.”

The second stage of the day would prove costly for both Brendan Reeves and Mark Pedder, although for very different reasons. Reeves found his Mazda2 running on only three-cylinders that was later traced to a faulty coil.

Meanwhile Mark Pedder found that not only his day but also his weekend had come to an abrupt halt when a rock damaged the oil cooler and radiator on his Honda Jazz.

A tough day for the remaining contenders, Jack Monkhouse forced to settle into fifth place behind a recovering Brendan Reeves. The Nissan driver admitted the road conditions hadn’t favoured his rear-wheel drive Silvia.

In the opening Round of the Side-by-Side Championship Michael Guest had been the star performer in the brand new Pirtek-backed Can-Am Maverick but faltered late in the day to let Cody Crocker take a big win, almost 6 minutes faster than second placed Justin Dowel.