The Nissan Motorsport Altimas of Todd Kelly and James Moffat will both tackle Sunday’s action at Symmons Plains with spare engines after striking trouble in Race 3.

Kelly was unable to start the second leg of the two-part Super Sprint race after his motor lost oil pressure, while Moffat’s took the flag in 19th.

Both engines were found to have lost crank case oil pressure once inspected by the team post-race, triggering the double change.

With only six of the V8 Supercar specification VK56DEs in its current engine pool, the two extracted units will be immediately sent back to the team’s Braeside, Melbourne, base, where they can be refurbished and readied to send to Pukekohe, New Zealand, with the remainder of the team’s equipment on Tuesday.

Despite proving genuine top 10 contenders last time out at the non-championship Albert Park meeting, the Symmons Plains layout’s reliance on engine power ensured that the team expected to struggle this weekend. 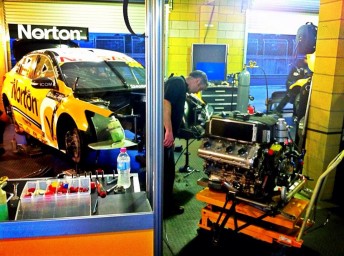 A 20th place run saw Todd Kelly prove the best of the four Altimas in qualifying, while Michael Caruso was the leading light in the race with 16th.

Moffat’s 19th is currently pending the outcome of a stewards inquiry into contact with Lee Holdsworth, while Rick Kelly managed just 20th.

“We’ve got to a stage where the car, handling wise, isn’t too bad, but there’s still a couple of areas that aren’t allowing us to realise our full potential,” explained Moffat afterward.

“The result is a little disappointing, but we collected some good points so we can’t be too upset.”

“We’ve got to get as many points as we can while the sun doesn’t shine for us in a straight line and I think we managed to do that ok today,” added Rick Kelly, who qualified a dismal 26th.

“I’m looking forward to tomorrow to be honest, we’re going to change a few things overnight, now we’ve got a pretty good understanding of where we’re at and where we need to improve, so a poor result, but good confidence for tomorrow.”