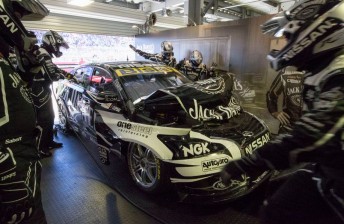 The popular former driver has assumed the dual role of Driving Standards Observer and Investigating Officer under the revised judicial system this year, taking over from category mainstays Tomas Mezera and Peter Wollerman.

Having already enjoyed what he described as a “baptism of fire” at Albert Park, where pitlane penalties where the hot topic, McConville will remain under the microscope this weekend thanks to the combination of the new race format and the tight Tasmanian circuit layout.

Although wary of the potential for incidents in Saturday’s ’60/60′ race, the former Bathurst 1000 podium finisher isn’t buying into the hype about a demolition derby at the double-file restart between the 60km ‘legs’.

“I think there’s a lot of extra hype because drivers don’t like change. I know that because I’ve been there and done that,” he told Speedcafe.com of the double file restarts, which were originally slated to be used after each Safety Car period throughout the championship – an idea scrapped amid cost fears just a week out from the season opener.

“At the end of the day they’re professional, paid drivers and they’re going to have to race smart and fair. I know they can do that.

“They might not like it, but we’re in the business of entertainment and if it’s going to create some more interest form a spectator’s point of view, the drivers will just have to work together to get through.

“Will there be carnage at the rolling start? I personally don’t think so. 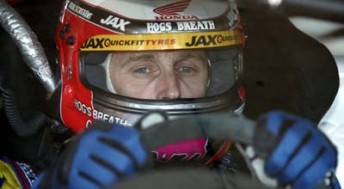 “I might eat my words, but we’ve put a lot of work into the setting of the AZ zones (the area in which the leader can accelerate away) and we’ll reiterate the start process at the drivers’ briefing so we’re all on the same page. Hopefully they’ll all get through.”

Despite enjoying previous judicial experience from categories including Formula Ford, the Carrera Cup and the Kumho V8 Touring Car Series, McConville admits that the step up to V8 Supercars-level this year is proving a significant challenge.

“The intensity level is just triple anything I’ve been involved with before,” he said of his position, which includes the investigating all on-track incidents as well as preparing evidence and making penalty submissions to the stewards.

“I’ve been across the skill sets involved before, but not at this level, and I’ve been leaving the track just exhausted every night.

“It’s a different level of stress than driving the car. That stress is a nervousness related to achieving a certain goal that you set for yourself, but this stress comes from different angles.

“It’s certainly more intense than I expected, but I’m enjoying it and genuinely excited about taking on a new challenge.”

Intricacies of this weekend’s format aside, McConville says that his main aims this season are to be consistent and to allow the drivers the “freedom to race”.

The second point was brought to bear at the first meeting of the year in Adelaide, where many were surprised to see James Courtney  go unpunished for a bump-and-run pass on Scott McLaughlin, who lost two places in the incident.

“I am ok with drivers giving each other a bit of a push provided that the push is low-risk,” explains McConville, stressing also that McLaughlin had been blocking for several laps prior to his shove from Courtney.

“I’ve said to the drivers that if you are going to give someone a tap, do it at the corner that they are blocking. If a driver loses one or two spots I’ll be ok with it, but if he goes off and loses 10 spots, clearly there will be a penalty.

“I don’t want to say I’m re-introducing the bump pass because that is risky, but if a driver is making it hard, he should know that he might get a bit of a push.”

That stance could well come to the fore this weekend on a track where blocking on the way into the two key corners, Turn 4 and Turn 6, can put paid to any potential for passing.

“I’ve watched the racing and I’ve been in amongst it at the enduros, and I think it’s too processional,” he said.

“I’m certainly not coming in wanting to hand out penalties and stamp my authority. I want to manage it because we need to be safe and keep the cost down as well, but I want them to race.

“I want this category to be strong and to be known for great racing. That’s how I’ll judge whether or not I’ve done a good job.”

Something that McConville says he will not tolerate is contact between cars in qualifying – a situation that occurred at both Adelaide and Albert Park.

Symmons Plains has traditionally proven the worst on the calendar for qualifying congestion due to its short length and curved back straight.

The V8 Supercars will take to the track for three 30 minute practice sessions today ahead of a final practice and first qualifying on Saturday morning.