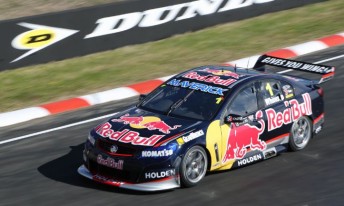 Red Bull duo Jamie Whincup and Craig Lowndes monopolised the number one position across the 30 minutes, with Whincup eventually emerging fastest with a 51.5974s effort.

Fabian Coulthard’s best had the Lockwood Holden 0.0026s adrift in second, with Lowndes and Jason Bright just fractions further back in third and fourth respectively.

Bright was the only one of the quartet to improve on his final run, bumping Practice 1 pace-setter Mark Winterbottom to fifth in the process.

The session was punctuated by two red flag periods, both called for dramas with the Erebus Mercedes E63s.

The first stoppage came at the eight minute mark and allowed officials to retrieve Tim Slade’s #47 entry from the Turn 4 gravel.

An off from team-mate Lee Holdsworth, still struggling with the electric power steering issues he encountered in Practice 1, brought a second brief halt to proceedings at the halfway mark.