No breaks for Darcy Ward in British League crash

No breaks for Darcy Ward in British League crash 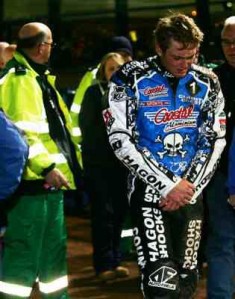 The sensation of the opening round of the 2013 Speedway Grand Prix Championship, Darcy Ward has escaped breaking bones in a horror crash in the British Elite League, but by no means is the Queenslander out of the woods yet.

In the clash against King’s Lynn, the sprocket shed from Ward’s bike, firing him over the handle bars.

Walking from the track under his own steam, he was immediately taken away for x-rays on his left wrist, which bent back in the incident – he suffered a break on that hand last year.

Team Manager, Neil Middleditch, confirmed there was no break to the double Under-21 World Champion, but admitted he may have to miss the Pirates next match on Monday night (Tuesday morning Australian time) due to the injury.

“Footballer Warren Cummings is hoping to get AFC Bournemouth’s physio to have a look at him and see if he can maybe give him a bit of treatment. It seems to me like he may have bent his wrist back when he landed quite heavily.

“He’ll know when he wakes up on Saturday or Sunday how he’s feeling and he’ll be able to tell us honestly whether he’s capable of riding or not.”

Poole Pirates heat partner and fellow Australian, Chris Holder viewed the incident at close quarters and observed that Ward was lucky not to re-ignite a head injury that put him on the sidelines at the end of 2012.

“It was a nasty crash,” said Holder. “His engine sprocket came off and that’s like hitting neutral. He went from flat-out to just nothing. He’s a lucky boy that he isn’t too bad.”

It is unclear how the injury will affect Ward’s preparation for the second round of the 2013 F.I.M. Speedway Grand Prix World Championship, to be held at Bydgoszcz in Poland on April 20.