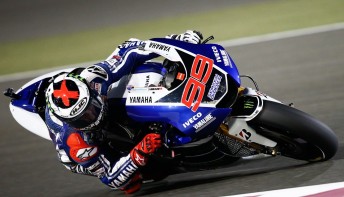 Jorge Lorenzo was fastest in Qatar

The Casey Stoner-less MotoGP era has got underway with World Champion Jorge Lorenzo heading opening practice for the Qatar Grand Prix under the lights at the Losail International Circuit.

“To start in this way, having three Yamahas in the top three positions, is very good,” said Lorenzo.

“That means the track is very good for the brand and I started in quite an easy way…the lap times came quite easily, so that’s good. We need to improve in three aspects: the track will improve for sure, the riding will improve and I also think it’s possible to improve the bike.”

For the first time ever, the session had a direct bearing on qualifying; the combined top ten from across the opening three practices will go on to make up the Q2 qualifying line-up on Saturday.

It looked as though Britain’s Crutchlow was to retain the top spot, having also led the final pre-season test in Jerez, but Lorenzo moved ahead with a last-gasp 1’56.685 lap time. This leaves the top three separated by just 71 thousandths of a second, with Rossi looking highly confident after leading the way halfway through. Reigning Moto2 World Champion Márquez and Andrea Dovizioso – now riding for Ducati Team – completed the top five.

Due to the extremely dusty track surface and riders pushing to find the limits, an assortment of names found the run-off area at Turn 1. However this was nothing compared to Yonny Hernández’s accident, as the Colombian lost the front end of his PBM-run ART bike which flipped across the gravel less than ten minutes into the session; fortunately, the 24-year-old was able to walk away and ended his day in 18th place.

It was an encouraging start to the campaign for GO&FUN Honda Gresini’s Álvaro Bautista, competing the night in sixth spot from the LCR Honda MotoGP of Stefan Bradl. Behind, a low-key start for expected title challenger Dani Pedrosa saw the Repsol man end up in eighth place, having run off the track twice. As Nicky Hayden confirmed a double top ten finish for Ducati Team, Aleix Espargaró raised eyebrows by ending his evening ninth quickest on the leading CRT bike of Power Electronics Aspar, just 1.1 seconds off Lorenzo’s leading time.

Australia’s Bryan Staring on the CRT Gresini machine was 22nd.

With the need to run under lights the practice gets underway from 6pm local time later today.