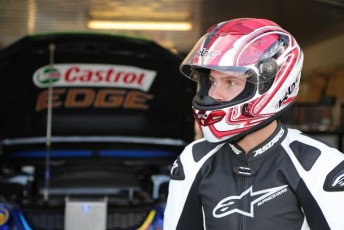 Highly accomplished karter Jordie Lindstrom was the surprise beneficiary of a unique competition to experience both a V8 Supercar and an Australian Superbike at this weekend’s Symmons Plains meeting.

Entering via the Australian Superbike Championship’s website, Lindstrom’s name was selected at random from a redraw after the initial winner failed to claim the prize.

“I couldn’t make it to race cars so this was an amazing opportunity to experience something different to karts,” he smiled modestly.

“The V8 Supercar is a completely different ball game to what I’m used to, you just can’t compare it. “The corner speeds for a real heavy car like that are amazing, and under brakes you feel like you’re going to go through the windscreen. It was a bit bizarre not having a steering wheel to hang onto!

“I’ve never done anything with bikes at all, so to get on the back of that was very impressive. I’ve got serious respect for those blokes now

“I felt like I was going to fall off the whole time to be honest… it was a little bit more extreme than I thought it was going to be. It was a really good thrill.”

The teams use dedicated bikes for the ride sessions, but aside from the presence of a second seat pad, grab handles under the fuel tank cap, and extra footpegs attached to the rear subframe, you’d hardly tell these from the real deal.

The presence of the passenger is a minor inconvenience to Winterbottom, but Henry describes the rides as the most nerve-racking aspect of his race weekend. “I’m more nervous before I go and ride two-up than when I ride my race bike,” he explained.

“I’ve only ever had one bad experience, but the thing is that you never know what you’re going to get.

“People don’t realise that where their feet are is the widest part of the bike and becomes the spot that will turn the bike.

“It’ll turn the bike more than the handlebars, so when they change the weight in their foot the whole bike steers across the track, and you can’t do much about it.

“It’s funny as well because some bigger guys are easier to go around the track with then small girls. We’ve had some small girls hanging on so tight that you can barely make it around!”

As Henry’s past experiences suggest, finding a balance between hanging on tight enough not to be flung off and relaxing enough to allow the rider space to do his thing appeared to be the name of the game. 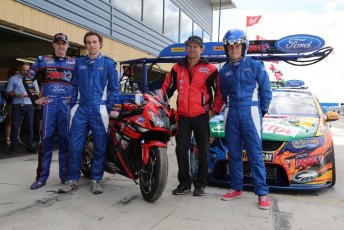 The passenger’s influence over the experience they end up receiving is a key point of difference to almost all other motorsport ride programs. You certainly don’t get out of a V8 Supercar thinking ‘maybe I could have done that better’.

In the end, though, simply surviving the process and returning immediately to the more familiar pursuit of observing and asking questions marked a successful afternoon’s work.

Neither Henry nor Stauffer will have to worry about giving Winterbottom a ride anytime soon, with the factory Ford pilot turning down an impromptu offer to jump on the Honda with an immediate “there’s no way I’m getting on the back of that” reply.

This weekend marks the opening round of the 2013 QBE Australian Superbike Championship.