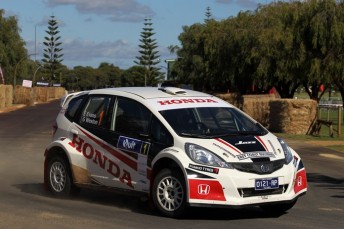 Evans won the stage by the closest of margins. PIC: Stuart Bowes

Despite brushing a barrier Eli Evans has pushed his Honda to Jazz to victory by just 100th of a second over Brendan at the Pedders Suspension Power Stage at the Quit Forest Rally in Western Australia.

Run alongside the sparkling blue waters of the Indian Ocean, the Power Stage used the Busselton foreshore, which will also play host to tonight’s opening two Special Stages.

“When we brushed the barrier I really thought I’d let it slip away,” said Evans

“To have two different makes of car, built to the same regulations, finish that close together. Well that’s amazing!”

For Reeves (Mazda2) he wasn’t disappointed to have been beaten.

“I think that’s the closest finish ever,” said Reeves.

“It just shows how tight it is at the top of the ARC!”

“That’s what we needed, a couple of Championship points!”

“It wasn’t a clean run though, the car ran wide at the hair pin and we’ve got such a tall first gear for this rally that we lost some momentum and had to build it back up.”

The action gets underway tonight with two runs around the Busselton Super Special Stage before the drivers turn their attention to the gravel forestry roads around Nannup for the remainder of the weekend.

Check out the video wrap from the Power Stage