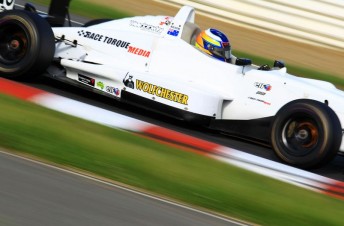 Former Formula 3 Australian Drivers’ Champion Tim Macrow will be on the grid at Symmons Plains after inking an 11th hour deal with Team BRM.

Macrow campaigned his own Dallara F307 at the season-opening Bathurst round last weekend but was forced to withdraw following engine problems in qualifying.

The 30-year-old has one previous start with the crack South Australian team to his name, winning a non-championship meeting at Albert Park with the squad in 2007.

“I’m really thankful to the team for helping me out and getting me on the grid,” he said ahead of the weekend.

“It’s bad enough that we have no points from round one – to miss two rounds would have ended our season here and there.”

Macrow steps into the BRM Dallara that won the Bathurst event in the hands of James Winslow.

A 10-year veteran of Formula 3, Winslow announced his retirement from the class today via a media statement that stressed his desire to progress to V8 Supercars or the Carrera Cup.

“I’m confident that now is the right time for this decision, having been speaking with teams in the V8 Supercars, as well as looking at the opportunities within Porsche Carrera Cup which could also lead to racing around the world once again, but with a new challenge,” he said.

Although without the two-time champion, this weekend’s 12 car F3 field is once again expected to provide close fought racing with Bathurst pace-setters Nathan Morcom and Steel Guiliana set to be challenged by the likes of fellow rising stars Nick Foster and Jack Le Brocq.

The latter has returned with the Erebus Academy for a second consecutive outing, and says he’ll use the extended break before the third round at Hidden Valley to secure a budget for the remainder of the season.