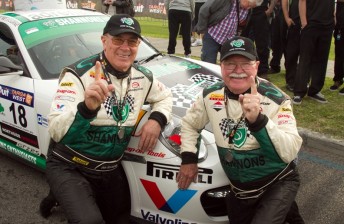 The dulcet tones of Barry Oliver may no longer be heard at V8 Supercar meetings but the former long-time commentator remains a constant in Australian motor racing.

As the V8 Championship Series visits Oliver’s home turf of Symmons Plains this weekend, the 69-year-old will drop into the pits for a fleeting visit on Friday to catch up with many of his mates.

But his most pressing task is to link up with legendary driver Jim Richards as the pair prepare notes for their 21st fling at Targa Tasmania starting in a couple of weeks.

Oliver, who on Saturday night will be the latest inductee into the V8 Media Hall Of Fame at a special function in Launceston, continues to cherish the association he struck with Richards 20 years ago.

Speedcafe.com’s Gordon Lomas caught up with Oliver to discuss his ongoing role as co-driver to Richards and his views on the current state of play in V8 Supercar land.

Speedcafe: How did you come to be involved in motor racing all those years ago?

Barry Oliver: Well if I go right back to the start my first ever race meeting as a spectator was in 1955 at Longford (near Launceston). But it wasn’t until the 1970’s that I actually got involved in the sport not as a competitor but as an official. I did a little bit of competition work but not much. Then I started doing commentary work in 1980 and it basically took off from there.

Speedcafe: The commentary work was at Symmons Plains I take it. How did that come about?

Oliver: Yes it was. I actually got conned into it. I was invited into the commentary box as a result of a discussion I had with a guy the previous Christmas and he handed me the microphone and said ‘you’re on air go for your life’. It was just as 26 Formula Vees were coming out of the pits onto the track. Then 10 minutes after he introduced me he went to the toilet and left me to it.

Speedcafe: So it was a case of being thrown in the deep end. From that you must have realised you had a bit of an affinity with commentary?

Oliver: Well I was a follower of all forms of motorsport and had gleaned a lot of information over the years and was pretty enthusiastic about the sport. I had actually said to this guy the previous December in 1979 that I wasn’t happy with one of his co-commentators at Symmons Plains and that’s when he said I should get involved and that’s when he spotted me in the pits early the next year. That’s how it all started for me.

Speedcafe: It’s been a while, five years or so, since you were the V8 series commentator. What are you up to these days?

Oliver: I ran a defensive driver training business from 1992 up until the end of 2009 and then I retired. My wife and I did some travelling around the country in a caravan. I’m still heavily involved in motorsport. I still write a weekly column for the Saturday Examiner which I’ve been doing for 24 years. I do articles for Jim Richards’ website and that keeps me occupied. I’m still heavily involved with CAMS. I’m the state chairman on the council of CAMS and chairman of the race advisory panel and I’m a member of the motor race commission. I’m still competing in Targa which is consuming a little bit of time and there’s six grandchildren so I’ve got plenty to do.

Speedcafe: You’ve won eight Targa Tasmania’s sitting alongside Jim Richards which is a phenomenal record you must be fiercely proud of?

Oliver: Yes I’m am but I must say it is getting progressively more difficult because some of these young guns are going very quick.

Speedcafe: I don’t think many people know how you first hooked up to navigate for Jim. Can you explain how that came about?

Oliver: I was supposed to do the very first Targa Tasmania in 1992 with Greg Crick. But at the end of 1991 I was invited to go to Melbourne to talk about being the possibility of commentating on the Australian Touring Car Championship which I accepted. But the result was that I couldn’t do the 1992 Targa because it clashed with the Lakeside round of the ATCC. So when I was at Lakeside I was coming back to the pits with Jim Richards and Mark Skaife after a Winfield Q&A session and Freddy Gibson who ran the Nissan team they drove for asked me what’s happening with Targa Tasmania. And I told him a bit about Greg Crick and Denny Hulme who were vying for first place. Then Jim asked out of the blue ‘what’s this Targa thing?’. And I gave him a bit of a rundown and then he said, ‘you live in Tassie, do you know the roads?’ to which I replied ‘yes I do’. And he then asked if I had experience in rallies which I did from an official’s side of things. Then he said ‘okay you and I will do that race next year (1993)’. To be honest I really didn’t think it would ever happen. But then in the September of 1992 he asked whether I still wanted to do it. And since then we’ve now done 62 tarmac rallies in Australia and New Zealand.

Speedcafe: So did you go to rally school and do a navigator’s course?

Oliver: No. I’m very much self taught and in fact I helped someone in that 1992 Targa with some notes. They weren’t on the numbering system as you and I know it but they were descriptive. So I used those notes as the basis for my own notes for Jim and I in 1993. And we’ve been using that system ever since. The reason is that in the beginning Jim and I were only doing one event a year. Jim was reluctant to get involved in something he wasn’t totally confident with (pacenote numbering system to describe a corner’s degree of difficulty). So he preferred our descriptive system. If I told him a corner was a medium, or hard or a flat he could visualise that straight away. But if I called a corner as being a 3 left he didn’t want to be working out what a  3 left was whereas if I described it he knew immediately what he was doing. We’ve had different people over the years tell us that is a waste of time and you’d be better off going to a 1-10. But I would say ‘have a look at our results’.

Speedcafe: So Targa Tassie coming up is the 21st you and Richo have combined in?

Oliver: Yep we’ve done every Targa except the first one. As I may have mentioned we’ve done a total of 62 tarmac rallies together and we’ve actually been on the podium 42 times. It’s a record I’m extremely proud of to be honest.

Speedcafe: Do you miss the V8 side of commentary given that many of your peers thought you were forced out too prematurely five years ago?

Oliver: Not so much now. In the beginning I was extremely disappointed because it came out of left field from my view but in hindsight it had been planned for some time and I felt I wasn’t treated very well. Time heals and I’ve got over it now. I do miss it but I don’t quite miss it as much as when it first happened.

Speedcafe: What are your thoughts on V8 Supercars at the moment as an outside observer?

Oliver: I think they still turn on a great spectacle but they need to keep in mind on how to make the spectators happy. And Symmons Plains this weekend there are some innovations that will go down well. Two 60km sprint races on Saturday which have no pit stops hence no confusion for the spectators and then a different format again for the Sunday. The introduction of Erebus and the Nissan team is a major plus. I have personal concerns for how long the likes of Ford will be there. It’s important that those new brands get their act together and become competitive. I’m hearing stories that some of the teams aren’t travelling too well financially despite outside appearances and that is a concern.