Nissan back in order for Perth rally

Nissan back in order for Perth rally 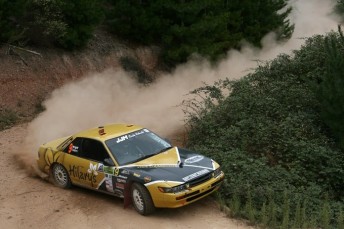 The Hilary’s Hotel rally team is confident of making up for lost ground in round two of the Australian Rally Championship, the Quit Forest Rally, in Perth this weekend.

After finishing fourth outright in the opening leg driver Will Orders was forced to withdraw from the second leg, jolting their ARC opening campaign in Canberra last month.

The team discovered a faulty inlet valve was the cause of their woes in the National Capital Rally after stripping down the engine of their Nissan Silvia at their Melbourne workshop.

“The team has put in some great efforts over the last few weeks to get the car back into tip-top shape. With the engine issues from Canberra resolved plus a few upgrades and minor tweaks we cannot be more confident heading into the rally,” Orders said.

Following a three-day journey across the Nullarbor, the team has arrived in Perth where regular Toni Feaver, who was replaced by Adam Wright in Canberra, will be back calling the pace notes for the remainder of the season.

Eli Evans leads the overall pointscore on 78 from Scott Pedder (74) with Jack Monkhouse third on 53.

The Perth rally starts on Friday.