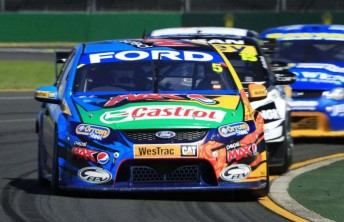 Leading V8 Supercars outfit Ford Performance Racing has confirmed the signing of a new commercial director as it continues its sponsorship negotiations with Ford Australia.

McAlpine has past experience dealing with Ford thanks to a stint as a sales and marketing director with founding V8 Supercars partner the International Management Group (IMG).

“Kelvin brings a wealth of sponsorship and brand experience to the team and while he has a strong working knowledge of V8 Supercars, the fact he also has a huge amount of experience with other sporting codes will be a big benefit to us,” he said.

“The current sport sponsorship environment is very challenging but his track record is very impressive so we have complete confidence in his abilities.”

FPR heads to Symmons Plains this weekend with its highest placed driver, Will Davison, third in the championship standings.

Despite a largely lacklustre weekend on the soft tyres at the recent non-championship Albert Park meeting, Edwards is hopeful that his cars will be at the front.

“Symmons Plains is usually a happy hunting ground for us so hopefully we can continue our strong run at the track,” he said.

“The new race format will be very challenging for everyone and place a stronger emphasis on qualifying which should help us, though with all-new cars and race strategies we expect anything could happen.”

Mark Winterbottom, Alex Davison and David Reynolds currently sit 15th, 20th and 23rd in the championship respectively after tough weekends at the Clipsal 500.