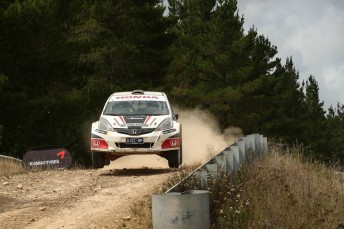 Pacesetter Eli Evans is on the verge of breaking a phenomenal record in Australian rallying this weekend.

If Evans is able to win round two of the ARC, the Quit Forest Rally in Perth, the Honda Jazz driver will surpass the record held by the late Possum Bourne who proved unstoppable during the halcyon Subaru days of the 1990’s and early 2000’s.

“If we win this round it will be eight from eight, which is an all-time record in the Australian Rally Championship,” Evans said.

“It’s in the back of my mind but I’m just focussing on doing what we’ve been doing the last seven rounds, which is being super consistent and super fast at the same time. We had an awesome year last year and were consistent into the first round this year.”

The WA event is renowned as being one of the toughest of the year with its slippery pea gravel surfaces.

“This is the hardest rally of the year. Being the first car out on each stage (Car One) at this rally is probably the most difficult because of the slippery surfaces. It will be one factor to consider but I’m not too worried about it,” Evans said.

The Evans Motorsport team’s hopes are high going into the second round of the 2013 season and everyone is behind Evans and co-driver Glen Weston.

“I’m trying to put pressure on the guys we’re racing against to see if we can come out on top. We’ll be focussing on the job we need to do, which is to be as quick as we can,” Evans said.

Evans narrowly won the opening round of the ARC in Canberra last month from Scott Pedder.