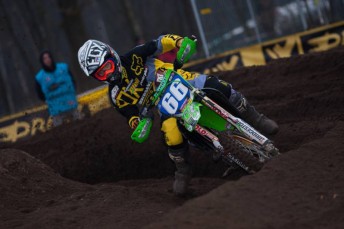 Two young Australians have established a great position in the Women’s MX World Championship after the opening round, with Kawasaki’s Megan Rutledge scoring a pair of second placings in the two Motos and KTM racer, Jessica Moore ending the event just outside the top five.

With the first round being held in freezing conditions in the Netherlands, Rutledge qualified solidly but a poor start saw her drop back in the field. She fought hard throughout the Moto to get herself into second placing. Moore did a solid job in finishing the opening race of the 2013 campaign in eighth position.

The following day, Moore stunned the establishment by taking the early lead, she was round up by others in the field, however that wasn’t the end of the Australian charge. At the flag, Moore crossed the line in sixth placing, which left her sitting sixth in points at the end of the opening round, some 14 points off the Championship lead.

Rutledge, the 17-year-old Sydney-sider, worked her way forward from fifth placing to the lead. She held onto the lead until late in the race she had a small fall. She was able to re-mount in second placing and hold onto that until the chequered flag. Whilst disappointed in not taking the first round win, Rutledge was philosophical about her weekend’s performance.

“I’m disappointed not to come away with the win but so excited to finish on the podium,” said Rutledge. “That red plate (Championship leader) was mine in the second race. I so wanted to win but I was so exhausted and the small get-off cost me the race win. I just want that red plate so badly now. This has been a great experience for me and I loved the challenge.”

With her two runner-up placings, Rutledge sits six points off the Championship point behind Italian Yamaha rider, Chiara Fontanesi, who won both Motos.

Rutledge returns to Australia now for the opening round of the Under-19 Development category in the Monster Energy MX Nationals at Raymond Terrace (NSW) on April 14.

Meantime, Yamaha’s new recruit, Billy Mackenzie finished second in the opening round of the New Zealand MX Championship. For the full story on Speedcafe.co.nz, CLICK HERE