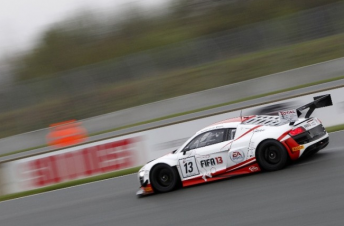 The Belgian WRT Audi outfit took a one-two finish in the first feature race of the reborn FIA GT Series season at a wet Nogaro, France.

Frank Stippler and Edward Sandstrom came from the back of the grid following an electrical failure in the qualifying race to take the win ahead of Stephane Ortelli and Laurens Vanthoor in the sister R8.

The third WRT entry of Rene Rast and Nikolaus Mayr-Melnhof had actually greeted the chequered flag first but was demoted to seventh with a post-race time penalty for having its engine running during its pitstop.

The Rast/Mayr-Melnhof R8 had battled with the qualifying race winning Sebastien Loeb/Alvaro Parente McLaren during the early part of the race before Parente tipped Rast into a spin shortly after taking over from Loeb.

A drive-through penalty for a seatbelt infringement from Loeb in the pitlane and a post-race penalty for the Parente-Rast contact eventually saw the McLaren classified just 13th.

The season continues at Zolder, Belgium, in three weeks time.