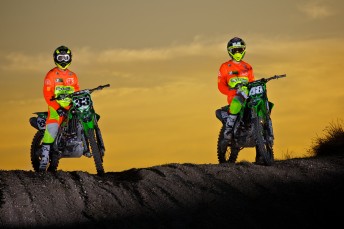 After starting last year on Suzuki equipment, the privateer team will line up in the MX1 (Mackie) and MX2 (Mosig) categories on the green machines with factory support. The team has brought new major sponsors on board in Troy Lee Designs and Maxima Oil.

Mosig is set for action and is aiming to challenge for his first MX2 Title after having a solid off-season in the USA.

“Without a doubt this is the best preparation I’ve ever had for a MX Nationals season. Having competed in the U.S over the off-season, I haven’t really had any time off. I’m feeling really strong for round one,” said Mosig.

27-year-old Mackie returns after 12 months away from Australian competition. He comes back after spending seven months in an altogether different pursuit – acting as a stunt rider in South Africa for the new Mad Max movie.

“Taking a year off was great for my racing career. I missed it so much that now I’m hungrier than ever to get out there,” he said.

Team owner Mark Haughton expressed his pleasure in welcoming the pair of well respected riders to his burgeoning outfit:

“Kade and Cody are incredible riders and the team’s entire support network is second to none,” he explained. “We are determined to over deliver on our promises and ensure a fantastic season ahead for everyone involved. We are all counting down the days until round one.”