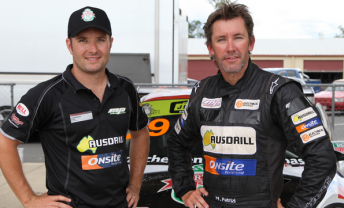 Australian motorcycling legend Troy Bayliss will make his return to competitive motor racing as a co-driver to Michael Patrizi in next month’s third round of the 2013 Carrera Cup Australia.

The two Gold Coast-based friends will team up under the Pro-Am format instigated for the Sydney Motorsport Park round, which will headline the first all-Porsche ‘Rennsport’ festival to be held in Australia.

Bayliss, a three-time World Superbike Champion and one-time MotoGP race winner, was last seen behind the wheel in the 2009 V8 Supercars endurance races, where he partnered Dean Fiore.

The 44-year-old Bayliss enjoyed his first taste of the McElrea Racing-run Porsche at Queensland Raceway today.

“I’ve known Michael for a few years now, we’ve become good friends, and he’s also a coach of both my boys in karting,” Bayliss explained to Speedcafe.com.

“But this is a different story because he’s coaching me in the Porsche Cup Car.

“I’m really enjoying driving the Porsche and I’ll get the chance to do a couple more tests yet.

“I’m already feeling great in the car so I’m really looking forward to the race next month.”

Currently kept busy with the karting careers of his two boys, Mitch and Ollie, and business interests including a motorcycle ride program called The Troy Bayliss Experience , Bayliss says he’s not eyeing a second career in cars.

“As everyone knows I did have a few laps in the V8s a few years ago, but I didn’t really have a lot of time in the cars and I had a lot of other stuff going on,” he said.

Also having a guest steer of Patrizi’s Porsche at Queensland Raceway today was Australian rally star Chris Atkinson, who like Bayliss, has previously enjoyed limited outings in four-wheel circuit racing.