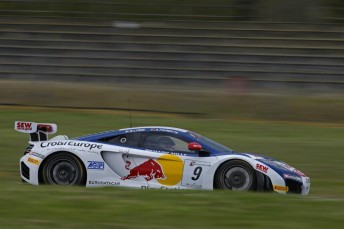 Sebastien Loeb has shown his prowess in rallying can be transferred to circuit racing with a thrilling victory in the FIA GT Series opening Qualifying Race at Nogaro in France.

Sharing his Sebastien Loeb Racing McLaren MP4-12C with Alvaro Parente, the nine-time World Rally Champion took over the wheel just after the half way mark of the 60-minute race. He hunted down the Belgian Audi Club Team WRT of Niki Mayr-Melnhof, who took the wheel from multiple Porsche Supercup champion Rene Rast. With just eight minutes of the race remaining, Loeb made a bold move around the outside at the hairpin and went on to score victory.

Loeb was delighted with the win and also paid tribute to his co-driver.

“Alvaro was very good today, he did a great start in the qualifying race and even if our competitors closed the door he never let them go,” said Loeb.

“It is very different from what I am used to do, I am here to learn, but I had a really good time driving the car today, it was a great fight from the start to the finish.”

Loeb will be out to complete the weekend with the 60-minute Main Race later today.