Rentsch takes Round One of AORC at Hyden

Rentsch takes Round One of AORC at Hyden 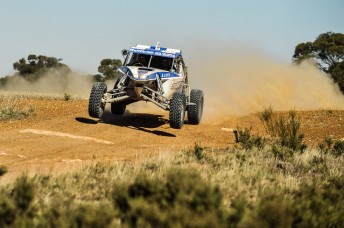 Shannon and Ian Rentsch take victory in opening AORC round

The Victorian team of Shannon and Ian Rentsch won the opening round of the Australian Offroad Championship.

The pair took victoty in the Komatsu Brooks Hire Hyden 450 held in the West Australian wheat belt and realised the team’s  third outright victory at Hyden and the first since debuting the #33 SR Racing Jimco in 2010.

Rentsch finished the five laps of the 85km course at Smithy’s Place in a time of 4:34m51s, 2m36s ahead of second placed #1 Snap SMU Racing team of Matt Hanson and Leigh Wells.

Hanson had been within striking distance of the lead during the first two sections, until Rentsch took control on lap 4 and stretched the 35 sec margin out to over two minutes.

Despite closing the gap on Bentley in the closing stages of the race, Eric and Neil Phillips were forced to settle for fourth outright in the #96 Ballistic Racing Aceco, ahead of the fifth placed Gerald Reid and Werner Zettle in the Gulf Western Oil Pro Buggy.

There were equally tight tussles throughout the classes.

The West Australian team of Mal Yeardley and Darren Russell won Prolite and the husband and wife Queensland based team of Russell and Judy Hartnett took the Super 1650 honours and an impressive eighth outright in their Toyota powered Cougar.

While Scott Gould and Matt Haywood revelled in the conditions to take their V8 Holden Rodeo to the Performance 2WD Class win.

Toyota Hilux pilots Wayne Panomarenko and James Kenneison were the victors in Production 4WD Class. In the Extreme 4WD category Colin Hunter and Simon Campbell kept their challengers at bay, driving their Dodge Dakota to the win.

The event was the last AORC that will be staged at Hyden. The series now prepares for the Tatts Finke Desert race at Alice Springs from June 7-9.