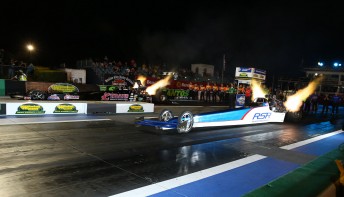 Steve Read’s perfect weekend at Willowbank Raceway continued as he added Saturday night’s round of the Australian Top Fuel Championship to his extensive CV and the inaugural Louie Rapisarda Trophy, whilst American star, Larry Dixon put together the fastest ever drag racing pass seen in Australia.

Read, also known as ‘The Pom’, blasted to victory with another triumvirate of passes in the four second bracket. He beat out his nemesis from Friday night’s event, Darren Morgan, to take both rounds of the ANDRA Championship and the Louie Rapisarda Trophy – inaugurated in memory of Top Fuel pilot, Louie Rapisarda who lost his life at the venue in 1990. It was a poignant moment for Read, who raced for Louie’s father Santo for 12 years.

“This is unreal – it is probably the best weekend we have ever had in drag racing, it is up there with racing in America,” said Read.

“To run every one of our six passes over the two days in the four second range, straight as an arrow and each clean with no oil or leaks, was just great. To win the Louie Rapisarda Top Fuel Trophy just tops it off, it really means a lot.”

Whilst everyone in the Top Fuel paddock was ecstatic for Read – and Morgan – who is now equal on points with Phil Lamattina in the Australian Top Fuel Championship – much of the attention centred on the Rapisarda Autosport International car of Dixon.

His first run of the night saw him put together a scintillating run of 4.503 seconds at 534kph (331.8mph). Under the antiquated ANDRA rules, despite surpassing the late Scott Kalitta’s pass of 4.517 seconds it wasn’t considered a national record. This didn’t bother Dixon who backed up the pass with a 4.543 to officially reset the record. 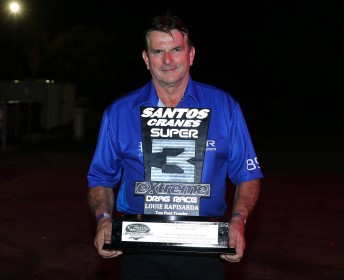 “Scott Kalitta was the quickest in the country and he lost his life in 2008 and it made me think a lot about him this weekend,” Dixon said. “Then obviously with Santo (Rapisarda’s) son Louie, it means there is a lot of good people we have lost in this sport, but they were at the forefront of our minds this weekend.”

His legendary crew chief Lee Beard – who’s aura was evident throughout the Willowbank Raceway pits at the weekend – said it was ‘job done’ by Dixon.

“It’s extremely satisfying. Coming here to Australia and making the quickest run outside of the US, backing it up for the national record, I couldn’t be happier,” said Beard. “When we discussed (coming to Australia), I told Santo I want to do it right and set the track and national records, and he laughed at me – but I don’t think he is laughing now.”

Dixon had to settle for third in the race after overpowering the track during his elimination run.

In Top Alcohol after a nightmare run on Friday, 15 times National Champion, Gary Phillips struck back taking the win for Lucas Oils. He lined up against Steven Ham who unfortunately was too quick on the uptake at the start and red-lighted.

Meantime, Chris Matheson – who was on a demonstration run aboard his Nitro Voodoo Top Bike – set a new benchmark for time and speed in the category with a 6.043 second pass at 389.1kph (241.8mph).

Another big crowd packed into the Willowbank Raceway for what was a memorable Santo’s Cranes Super 3 Extreme Drag Race.