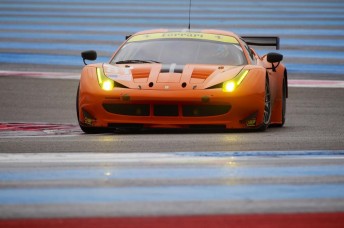 The 8Star Motorsports Ferrari that Jason Bright will drive in June’s Le Mans 24 Hours has ended the official pre-season test at Paul Ricard as the second fastest GTE Am entry.

A 1:59.46s effort from Peter late on Saturday afternoon ensured the 8Star entry was second of the eight GTE Am cars present in the combined classification, slower only than the #61 AF Corse 458.

Although disappointed not to get more dry running, Bright said he was pleased to have been setting competitive lap times when running on comparative tyres to his rivals.

“For a track that doesn’t look very exciting on TV Paul Ricard is pretty impressive when you get here,” he said of the testing venue. 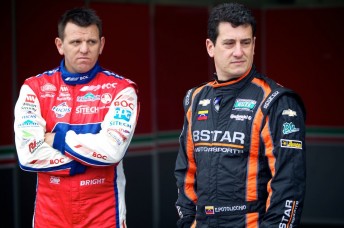 Bright and Potolicchio in pitlane

“There are quite a few high speed corners, which is what I need to get used to in the Ferrari with its extra downforce.

“The car is awesome and having such a good tyre really gives you confidence to push.

“After driving this I can totally understand why guys coming to Australia have trouble getting used to the V8 Supercars.

“The downforce and grip these cars have is a huge difference to what I drive in back home.”

Bright will now return to Australia to contest the second event on the 2013 V8 Supercars Championship calendar at Symmons Plains, Tasmania, next weekend.

The #26 entry that Martin is sharing with Briton Mike Conway and Russian Roman Rusinov set the sixth fastest time of the two-day test, fourth of the LMP2 runners.