FLASHBACK: A look at some of the racers who have taken on the Mountain

FLASHBACK: A look at some of the racers who have taken on the Mountain 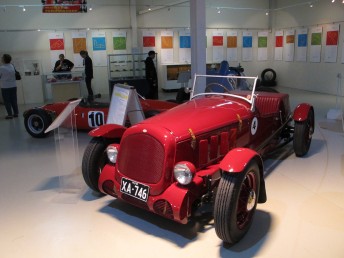 The last of the George Reed Special’s ‘The Red Car’. This replica was built in the 1990’s with the help of Reed.

Well before touring/saloon cars made their home at Bathurst in the endurance races during the early 1960s, hill climbs and races were filled with a wide variety of machinery from open wheelers to self-made chassis.

One of those to make an impression right from that very first meeting in 1938 was a local bloke called George Reed. He was in his late 20’s when that first historic meeting took place.

In the early years he would run a Cranston Ford and a Ford Roadster.

Reed would go on to build a series of ‘Specials’ the last of which was a Monoskate built in 1949. These were quite elaborate in their design.

Reed had used an assortment of Ford parts on a home-made chassis with his creations known as ‘Skate Specials’. These were all defined by colour and at the hands of Reed and another driver called Warwick Pratley they would conquer a variety of racing events from the lesser known to Australian Grands Prix.

A lovingly built replica of one of Reed’s most famous cars, a Ford V8 Special roadster which is more widely known as ‘The Red Car’ was built in the 1990s. This example is one of many prized exhibits in the National Motor Racing Museum located near the entrance to Mount Panorama.

In fact “The Red Car” was driven to victory by Pratley in the 1951 Australian GP that was staged at Narogin, south-west of Perth.

Mount Panorama was only a few years young when war and the police forced racing to stop for a period in the 1940’s.

The police had banned motor racing because they felt it was unsafe but the council took the police to court and won.

The track had fallen into a poor state of repair before the council allocated money to fix the circuit. Racing resumed in 1946 and attention soon swung to a bid for Mount Panorama to host its second Australian GP in 1947. Bill Murray managed to win the AGP at ‘The Mount’ in his MGTC.

Tony Gaze, the highly decorated fighter pilot who would go on to become Australia’s first driver in grand prix (F1) racing, tried his luck at Bathurst in 1948.

Gaze would run a supercharged Alta in the 25-lap NSW Hundred race and an HRT Aerodynamic that could crack more than 170km/h (100mph) down Conrod Straight and would run in the sprint handicap races while multiple Australian GP winner Lex Davison ran a supercharged Alfa Romeo.

The 1950 October meeting at Bathurst remains one of the wettest on record with Pratley winning in monsoonal conditions in the Monoskate which was to be the last of the Reed-built Specials.

Reed lived until 2009 and was bestowed with several honours including winning an Australian Sports Medal in 2000 and being enlisted as the grand marshal at the 2006 Easter Bathurst Motor Racing Festival.

Bathurst born and bred Reed had decided it was time to become an official by the 1960’s just in time for the arrival of a revolution at Bathurst.

Tomorrow Speedcafe.com takes a look back at when the Bathurst legend took hold.