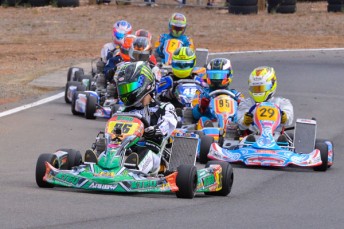 David Sera moved two steps closer to becoming Australia’s most capped karting driver of all-time with a pair of wins at the Australian Karting Championships on Sunday.

Sera was victorious in both the Leopard Light and Clubman Heavy categories at the 51st running of the event to move to within one victory of John Pizarro on the all-time winners list in the sport.

The Arrow Karts driver enjoyed victory in the Leopard Light category ahead of local driver Josh Tyanan and Queenslander Ben Stewart to claim his 13th crown. He then got the better of a spirited battle with V8 Utes driver Kris Walton in the Clubman Heavy final to win his 14th career title. Behind them, Western Australian Kip Foster fended off outgoing champion Matthew Wall for third place.

“I was always confident that I’d be on the pace in Clubman Heavy given my recent form at the Victorian Championship, but to win both that and Leopard Light is a fantastic feeling,” said Sera.

“There were some great drivers in the Clubman Heavy field (nine of the top ten starters in the final were current or former national champions). So to have come away with the win is very rewarding.

“My win in Leopard Light was somewhat of a surprise as I hadn’t raced that class a lot recently and I was really struggling to match it for speed early in the weekend.” Joshua Denton became the third generation of Dentons to win at the event (Pic: AF Images/Budd)

South Australian Josh Denton joined his Father and Grandfather as winners at Australia’s most prestigious stand-alone karting event to ensure the Denton family became the first to have three generations win a national title. His Grandfather, Trevor, was victorious in the 1964 event while his Father, Craig, won in 1992.

Despite finishing second to Sera in Clubman Heavy, Walton had already secured a green plate in the Leopard Heavy category. Walton moved his way to the front on lap five of the 16-lap championship final ahead of Wall. He then held a four-kart buffer over the Shamick Racing driver for the ensuing laps before showing superior speed to clear away from the quartet behind him.

CRG driver Jake Coleman upstaged his more experienced rivals in the Clubman Light category with a superb victory at Monarto. In only his second race in the category after moving up from juniors at the end of 2012, Coleman moved into the lead midway through the final. From there, he wasn’t challenged on his way to victory. Former Junior Clubman Champion Jesse Elliott finished second ahead of early race leader Aidan Wright.

Darwin’s Bryce Fullwood became the first driver from the Northern Territory to claim a National Karting Championship when he crossed the line first in Junior National Light. 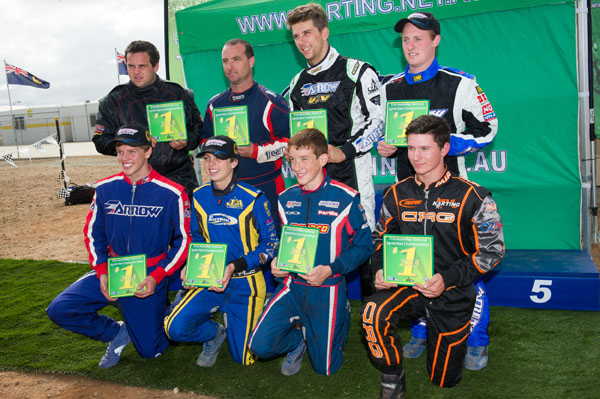 The 2013 Champions at the Australian Karting Championships (Pic: AF Images/Budd)