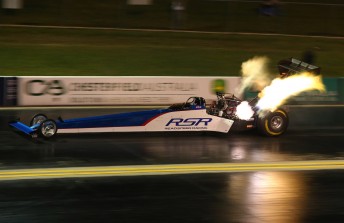 Steve Read on his way to victory at Willowbank (PIC: Dragphotos.com.au)

CLICK HERE to watch video of Larry Dixon’s amazing save.

In front of a massive Good Friday crowd, Read had one of the best days of his extensive career in Australia – each one of his runs getting down the 400 metre Willowbank Raceway in the four second bracket. He was the only driver to do this and was rewarded with bonus points for lowest elapsed time of the night as well.

Despite being based mere kilometres from the Ipswich circuit, it was his first Top Fuel win at the venue since 2002 – in the process he claimed the scalp of current ANDRA points leader, Phil Lamattina and defending Champion, the Mildura Missile, Darren Morgan.

“It was the first in quite a long time. Sometimes I think we’ve written the book in how to lose to Darren so to get by him in a straight head to head fight is a great feeling. It’s great to get the monkey off my back,” said Read.

“The whole team has worked hard to get the elements together and it’s a great feeling and result for them.

“None of our equipment is new and we’ve dispelled a number of myths by walking away with the lowest ET for the meeting.

“Tomorrow, I think we can get down into the 4.60s. It’s pleasing to end the day with running every lap in the four second range. I could really get used to this feeling!”

In the qualifiers, Dixon had one of the most unique incidents ever seen worldwide in Top Fuel competition when tyre shake sheared one of his wheels off and sent him into a full 360 degree spin at 240kph. Fortunately, team mate Damien Harris in the Best Tractor Parts machine had suffered a blow up of his own in the left hand lane as it could have become a nasty incident. 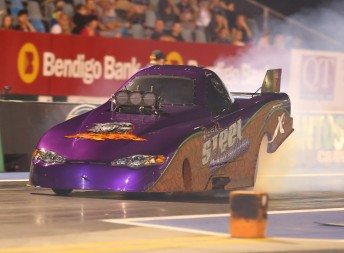 The Rapisarda Autosport International team, led by Lee Beard, completely re-built Dixon’s car for an end of night demonstration run and he didn’t disappoint – setting the quickest pass of the night in elapsed time and speed despite shutting off when the car got taily at the 300 metre mark.

In the other feature category, Top Alcohol, category debutante and another Ipswich local, Darren Fry took a momentous victory. Not only was it Fry’s first win, he only passed his licensing requirements on Thursday. He beat home Rick Gauci to take the win.

“To take the win today is just simply beyond my wildest expectations – I am just absolutely gobsmacked,” said Fry, who has been competing at Sportsman level for 17 years.

This afternoon, the field will fully re-set and do it again with the qualifying runs set for 5pm at Willowbank Raceway outside Ipswich.