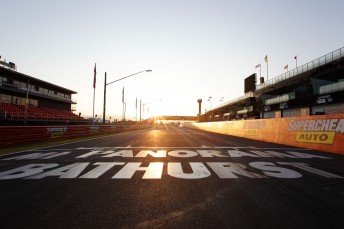 The throng was gathering at the Mountain 75 years ago for the Easter meeting which was to launch Bathurst into worldwide prominence as a quality motor racing destination.

Earlier in 1938 the path, carved by teams of labourers with nothing more than picks and shovels, was ready for racing however the motorcycles and cars would have to contend with a dirt surface as time ran out to lay tar on the track.

The surface was granite-based and would be hardy enough for the action to follow that would be highlighted by the Australian TT motorcycle races and the Australian Grand Prix for cars on April 16, 1938.

The crowd volume swelled for this historic occassion although actual figures vary however there has been many honourable accounts putting the figure at close to 20 000.

What the settlers had called Bald Hills was about to be forever known as Mount Panorama – very much the nursery of Australian motor racing.

Among the bike action was senior, junior lightweight and sidecar TT bike races and a handicap race.

History books show that a Queenslander, Les Sherrin won the very first race at this new venue. Mayor Martin Griffin was by now being feted for cleverly hoodwinking the Government of the day that it would be a prime tourist drive and duly the authorities granted money to the project.

However ‘this tourist driver’ was now firmly on a path to becoming an iconic racing circuit as Sherrin claimed honours in the junior TT on a Norton.

The next day the cars would have their turn at the Australian Grand Prix which had attracted entries from around the country as well as some visiting competitors from the UK.

Yorkshireman Peter Whitehead, who came from wealth, was in Australia on business but he was also a handy as a racing driver.

As was his want, the 23-year-old was accompanied on his trip to Australia by his ERA Type B. The English Racing Automobiles open wheeler was built in neighbouring Lincolnshire.

He was to have compatriot company in the AGP with Alan Sinclair in the small Alta 1.1litre open wheeler but Sinclair did not take his place in the 40-lap race. Such a distance at this massively demanding circuit was indeed an endurance test of epic proportions.

In the race Whitehead would create history by guiding the ERA to victory as he covered the distance in just under three hours.

Second place went to Aussie Les Burrows who drove a Hudson-built 2.6litre Terraplane Special which was rather monstrous compared to the lightweight ERA. Under the handicap conditions Burrows would start the race 15-minutes ahead but was to prove no match for the lighter English machine.

Whitehead would go on to celebrate vigorously that night after his victory and in quite outrageous style.

According to eyewitness accounts, which have been verified by Speedcafe.com, Whitehead stripped naked, burnt his clothes in the main street almost outside the council chambers and was involved in a food fight.

Such behaviour at the time was indeed bizarre. Whitehead would unwittingly set a precedent for riotous behaviour at Bathurst bike and car races in the decades to follow.

That weekend a legend was born – Mount Panorama would in time mature into one of the world’s most celebrated race tracks.

Tomorrow Speedcafe.com takes a look back of some of the pioneering racers at Bathurst in the years before it became a prime touring car/saloon car endurance destination in 1963.