James Winslow on record pace as Bathurst festival kicks off

James Winslow on record pace as Bathurst festival kicks off 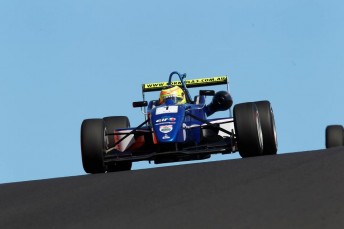 James Winslow has set the fastest ever officially recorded lap of Mount Panorama on the way to topping practice ahead of the opening round of the 2013 Formula 3 Australian Drivers’ Championship.

The Briton clocked a 2:04.6160s time on his final lap of the second of two 30 minute sessions, shaving 0.0027s from the benchmark set by Chris Gilmour in Race 2 last year.

“I thought that we would break the lap record this year and I’m predicting that in cooler conditions tomorrow in qualifying we should go at least a second quicker.

“The air will be cooler and we will be on new tyres so we should be somewhere in the 2m03s.”

Former Formula Ford and Carrera Cup front-runner, Nick Foster, had a less than ideal first day in Team BRM’s Mygale M-08, touching the wall at the top of the Mountain on his first flying lap of the second session.

The resulting rear suspension damage kept Foster off-track for the remainder of Practice 2, but the car is expected to return to action for qualifying and Race 1 tomorrow.

Jon Collins was also in a spot of bother during the afternoon, losing a wheel on his R-Tek Dallara during his first flying lap. He returned for a single circuit late in the going to end the day at the foot of the time sheets with Foster.