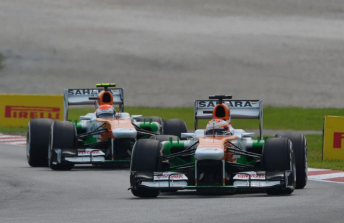 The Force India Formula 1 team will continue to use Mercedes-Benz engines in 2014 under a new and expanded deal with the German car manufacturer.

The team has been running a combination of Mercedes engines and McLaren supplied gearbox and KERS units since 2009, but will now source all three powertrain systems from Mercedes.

The move comes amid rampant speculation that McLaren will switch from Mercedes to Honda engines, most likely for 2015.

“Our new agreement with Mercedes-Benz for the coming years is the most significant in the history of Force India,” said Force India founder and co-owner Vijay Mallya.

“With new powertrain regulations being introduced next year, I can’t think of a better partner to work with as F1 enters a new and exciting era.

“The agreement gives us the long-term stability we require and will enable us to continue our journey towards the front of the F1 grid.”

Formula 1 is moving from its current 2.4 litre V8 engine formula to 1.6 litre V6 turbos next season.