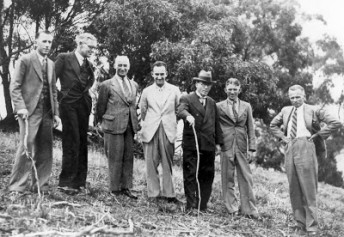 Mayor Martin Griffin (centre. dark suit) pictured here at a spot which would be later known as Reid Park

Over the Easter weekend 75 years ago, Bathurst was writhing in activity.

Speedcafe.com takes a trip down memory lane to honour the opening of the Mount Panorama circuit over the Easter weekend in 1938.

The story about how this hallowed ribbon of bitumen came to life is almost as legendary as the track itself.

It was the vision and gall of the then Bathurst mayor Martin Griffin that managed to coax the government of the day into agreeing to pay for the project.

Griffin’s plan was simple, if not downright cheeky; pitching the idea to gain funding on the premise that the area that was once called Bald Hills would make a prime tourist drive when all along the motive was to bring to life a racing circuit.

It was an incredible situation that the project was given the go-ahead given that Bathurst like the rest of Australia was yet to recover fully from the Depression years of the early 1930’s.

Griffin knew that the nearby township of Vale, which had held motorcycle races on the streets had come to the end of the road with the dirt roads falling into a bad state of disrepair while angst from police and local authorities also weighed heavily on the demise of what had become an otherwise popular annual event for the region. 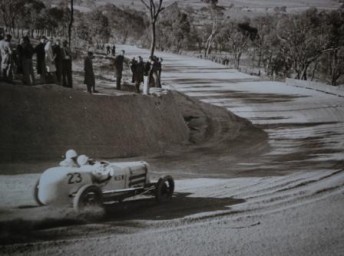 After gaining the necessary funding, work on the site began with the labourers faced with a devil of a job to carve a path through thick virgin scrub with gangs wielding picks, shovels and 100-weight trucks.

Any hint that the transformation of Bald Hills would be more than merely a ‘scenic drive’ emerged not long after the project was given approval when Griffin, the Town Clerk Hughie Reid and other local authorities posed for a photograph with Don Bain, who had won the first race at the Vale circuit in 1931 and a visiting Irish racer called Stanley Woods who was a star in the UK and Europe as a 10 times winner of the Isle Of Man TT race as well as motorcycle grands prix in Europe.

After carving through the mountainous, unforgiving terrain the circuit was ready for action for the Easter long weekend in 1938. Such was the time constraints, however, the track meandering its way through Bald Hills could not be sealed in time for the official opening.

Les Wardman, a former Bathurst mayor and long serving councillor, was present when the work began at Mount Panorama.

“I went up to the Mount when work began and those cobbers on the end of shovels and picks had a bloody hard job,” Wardman told Speedcafe.com’s editor-in-chief Gordon Lomas, who interviewed him for a book to be published by Penguin in August about the history of Bathurst, the town and the circuit.

“But it was work that in itself was great whereby at the end of it there would be this scenic road – well, racetrack. It was the greatest con job you’ve ever seen but it was one of those con jobs that in a very Australian way Griffin got away with and more power to him.”

By the time work was completed racers both on two and four wheels were faced with the challenge of a massively demanding, twisting, undulating circuit with dirt under their tyres.

The first official meeting started with bike races and then incorporated cars with the running of the 1938 Australian Grand Prix – the first of four times this prestigious car race has been held at Mount Panorama.

Tomorrow Speedcafe.com relives the historic first meeting at the mountain 75 years ago.