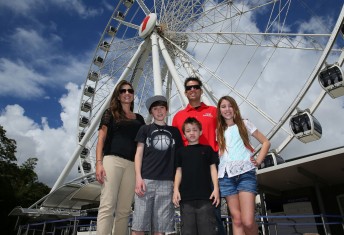 Larry Dixon with his family

Since starting his NHRA Top Fuel career in 1994, Indiana-based professional Top Fuel pilot, Larry Dixon has won three NHRA Championships and sits second on the all-time Final Round wins list in the sport.

After a hiatus during 2011, the 46-year-old made a return to full time competition at the last minute, joining forces with Australian team owner, Santo Rapisarda for his most serious tilt at the NHRA yet.

An advantage for Australian motorsport fans is that the passionate Sydney-owned team has brought Dixon – hailed as the most credentialed drag racer to ever compete in Australia – to Willowbank Raceway for this weekend’s Santo’s Cranes Super 3 Extreme drag race.

Speedcafe.com caught up with Dixon when visiting Brisbane with his family.

SPEEDCAFE: Larry, firstly welcome, this is your first time racing in Australia, what are your expectations?

Larry Dixon: Every race you go out to do your best for the team and to bring home a victory, so that will be the game plan. It won’t be easy though, its a different rule package down here in Australia, a different country, a different format and even a different race distance (400m quarter mile over the NHRA’s 300m 1000-foot). I will be doing my best to bring it home and put the car into victory lane for Santo and to walk away with the Louie Rapisarda Trophy at Willowbank.

SPEEDCAFE: Australia is one of the very few places that Top Fuel is raced, how is the Australian version of the sport considered in the US?

Dixon: A lot of Australian teams have correspondence with teams in the States. They share technology and a lot of information is traded back and forth between the two nations. The Australian teams don’t do a lot of races compared to the 24 events that we do over 10 months in the NHRA. Having said that, none of the teams in Australia are missing any of the technology to go as fast as possible – the teams here are world class.

SPEEDCAFE: You’ve been out of the seat for a little while, what attracted you to joining Rapisarda Autosport International?

Dixon: I think the same things that attracted me to the other teams in the past – I was in the right place at the right time and it seemed like a good fit. When I was approached, we talked a bit, struck up a deal and here we are. 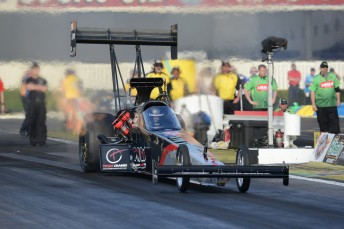 Larry Dixon in his office

Dixon: It is a very big deal. When I am up there racing in America, you’re fighting for your own small piece of the pie. In this situation, it has gone further than that. It seems like I have gained quite a following in Australia through being associated with the Rapisarda Autosport team. From that standpoint, it makes you really proud and makes you feel as though you’re competing for a little bit more than everybody else is.

SPEEDCAFE: You’ve driven for people like Don ‘The Snake’ Prudhomme and so on in the past, how does Santo Rapisarda compare to those guys?

Dixon: All these guys are very competitive when they get on the racetrack, they all want to win and win real bad, Prudhomme, Allen Johnson, Shaikh Khalid they are all similar – and Santo’s no different. We’re they differ is their personalities off the track – they are very different. Santo likes to have a good time and have a good meal, and working with him this year has been so far, so good.

SPEEDCAFE: The deal to race with Rapisarda Autosport International in 2013 came together very late in the piece – how much of a challenge has that been?

Yeah it was done in January. Most deals are done between September and October and ours was done in mid-January – we start racing in the second week of February! There was a lot of work by Lee Beard and everyone on the team to get things changed over to the setup that Lee feels comfortable with, but we were able to get it together real fast and we got up to speed pretty quick. We are a top 10 car at the moment (in the NHRA field) and for the rest of the year I think we’re going to concentrate on trying to be a top five car. If you have a top five car, you can win any event and an NHRA Championship.

SPEEDCAFE: How instrumental was Lee Beard being part of the arrangement to have you agree to be part of this team?

Dixon: Lee actually brokered the deal with me to race for Rapisarda Autosport. I hadn’t really spoken with Santo at all about it – Lee contacted me and we met at the shop (in Brownsburg, Indiana), struck a deal and here we are. He is a hugely important and talented part of our operation having won many races and Championships of his own. We have brought him to Australia to prepare the car this weekend, which to put it into Formula 1 speak, I see it as being similar to when Michael Schumacher went to Ferrari – he took all of his people with him so there was a comfort and skill level around him – it is exactly the same for me.

SPEEDCAFE: The Don Schumacher Racing team has introduced a fighter jet like canopy into Top Fuel – what are your thoughts on that?

Dixon: It is a design that’s been used over the years – right back to the 50s. We saw (Big Daddy) Don Garlitts use it in the 1980s and so from a performance standpoint, if the Schumacher team goes out there and performs real well, better than the other teams without canopies, you’ll probably see other teams go to that style.

SPEEDCAFE: The NHRA has a new sponsor on board in 2013 in Mello Yello, how is that working out for the Championship and the sport?

Dixon: It seems to be going well. The Full Throttle brand that Coca-Cola also owns (the energy drink that was the previous naming rights sponsor) grew it’s brand through the association with our Series, but they don’t sell it everywhere and certainly not the volume that they sell Mello Yello. We’re still under the Coca-Cola umbrella but with the Mello Yello brand, but they sell it in major quantities in America. With it being widely available in places like Wal-Mart, I think you’ll see a lot of places that carry Mello Yello give us a little more leverage to do pre-event marketing and planning for the events. It looks to be going well and we’re really proud to have Mello Yello as the Title rights sponsor to our Series.

SPEEDCAFE: How is the health of drag racing in America at the moment?

Dixon: I think it’s doing better. In 2008/2009, the economic downturn affected the sport as it did other sports both in the US and worldwide. But I think you’re seeing sports and businesses come out of that now and drag racing’s no different. I think it’s rebounding quite nicely.