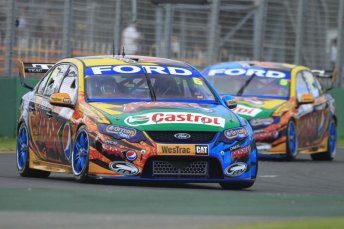 FPR’s current three-year deal with Ford Australia concludes at the end of the season, with reports suggesting that the troubled car maker could pull the team’s funding, undertaking a complete exit from the category in the process.

Nash, who teamed with Rusty French to acquire FPR from British engineering firm Prodrive less than four months ago, told Speedcafe.com that securing a new deal with Ford “has always been my number one priority since purchasing the team”.

“It’s absolutely 110 percent wrong,” he said of suggestions that negotiations between FPR and Ford had broken down.

“The negotiations with Ford are no different to any other year. FPR has traditionally had three year terms with Ford, and that has just come around to another period.

“To lay the facts on the table, there have been no pullbacks from Ford in advising us that they’re not going forward or that there’s a restriction in monetary issues.

“The conversations are confidential by nature but I can absolutely say that negotiations are ongoing.”

The absence of both Nash and FPR managing director Tim Edwards from the recent Australian Grand Prix meeting sent speculation scurrying through the Albert Park paddock.

A rumour that the pair’s visit to Prodrive headquarters in the UK as part of a Metcash (owners of The Bottle-O) sponsor function had included a secret trip to BMW headquarters in Munich has angered Nash.

“Not at all, absolutely not, and I can speak on Tim’s behalf as well on that,” he said when asked if any discussions with other manufacturers have taken place.

“I think everyone got bored at the AGP while we weren’t there and started making up conspiracy theories.”

He added that the team has no contingency plans in place should Ford pull its funding.

“You might say why wouldn’t you? But why would we?,” he said of a contingency.

“There’s nothing to indicate from our point of view at this point in time that Ford are exiting.

“You can always run the risk of that (a sponsor leaving). It’s no different to FPR and Orrcon. They (Orrcon) had been an excellent long-term backer, and still are, but they had to retreat a bit for their own reasons.

“Things change along the way, which is always a risk with sponsorship, but until such time that you get those indicators, hedging your bets and trying to have a few options when you’re a factory team at the higher end of the championship… you just can’t afford to be doing those sort of things.

“We have not got a contingency but we don’t believe we need one.”

Regardless of direct funding levels from the manufacturer, continuing to run Fords in the V8 Supercars Championship would undoubtedly have external commercial benefits for FPR, including the retention of its supporter base and strong merchandise sales.

Nash agrees that being one of just two teams currently running Falcons, along with Dick Johnson Racing, gives his squad a positive point-of-difference in the market.

“I don’t mind saying that I do support the Car of the Future and other manufacturers, but I’m still a firm believer that the brand we have out there is blue versus red, as it has been for decades,” he said.

“The other manufacturers have a lot of work to do in order to get to that level. I can’t see the Ford versus Holden rivalry ending.”

The rampant speculation on FPR’s future comes just days after the formal departure of its commercial director Mark Roworth, who resigned from his post late last year.