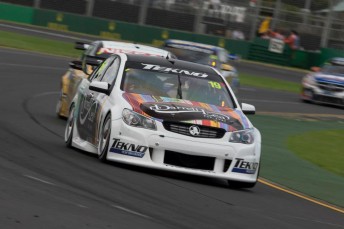 Tekno Autosports driver Jonathon Webb will become the flag flyer for Darrell Lea chocolates in V8 Supercars for the rest of the season.

Having run in an interim Police livery displaying a road safety message at Sydney’s pre-season test and Adelaide’s Clipsal 500, Webb’s Commodore was ordained in Darrell Lea signage recently at Albert Park as a precursor to a longer term deal being confirmed.

Tony Quinn, owner of the well known confectionery brand, has given the go ahead for the company to become the new primary sponsor on Webb’s Commodore.

Quinn also owns the VIP Petfoods company that sponsors Tekno’s #97 Holden of Shane van Gisbergen, and had previously been planning a mid-season change to Darrel Lea branding on the Kiwi’s car.

“The plan was that Shane would start the year with VIP because of our equity in that company, then we would go to America (May’s Austin 400) and change to Darrell Lea because it is the number one selling licorice brand in America,” Quinn told Speedcafe.com

“It was a real problem to be honest because as it was, we would return from America and it would then need to be stickered as Darrell Lea Australia with new race suits, new garb, new everything.”

Quinn added that Van Gisbergen’s early success in VIP colours, which has included an impressive victory in the Clipsal 500, played its part in altering the plan.

“Because Shane has hit the ground in tremendous fashion the VIP boys are going, ‘hang on a minute, we’ve been at this for a while and we want to continue’,” he continued.

“Anyway, I have now given the go ahead to have Darrell Lea on Webb’s car for the rest of the year.

“That way we can keep them happy and keep the VIP boys happy. Also Darrell Lea has got some huge plans for new products this year.”

Quinn said there remains a small chance that both Tekno cars would run with the Darrell Lea branding at the US round at the Circuit Of The Americas venue.

“We might change to Darrell Lea just for there, but probably not,” he said.

“It depends on whether Shane does well at the next couple of rounds. But because everyone has got a VIP jacket and stuff we probably won’t (change the sponsors).

“If people see Darrell Lea on Shane’s car, it could possibly have a strange effect because people might say, ‘have VIP run out of money or are they in trouble?’.

Webb’s entry has not enjoyed a full-time naming rights backer since the loss of energy drink brand Mother at the end of the 2011 season.

Webb and van Gisbergen are running seventh and ninth respectively in the V8 Supercars Championship after the Clipsal 500 Adelaide earlier this month.