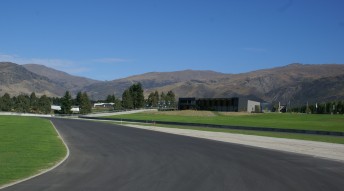 In November the final leg of the AGT will be run at Quinn’s lavish complex, Highlands Motorsport Park, located at Cromwell, 50km outside of Queenstown.

The facility which boasts the National Motor Sport Museum, a go-kart track and a 4.5km circuit opens this weekend.

The AGT leg at the complex will be joined by the South Island Endurance Series with the two categories then combining in a new event on the final day of the meeting scheduled from November 8-10.

This ‘event’, which Quinn and his team at the facility that has cost upwards of $20million and has taken 12 months to build from a greenfield site, is being seen as a possible birth of a signature race for NZ.

“Then on the Sunday we will have a combined endurance race between the two.

“We might have 40 cars on the grid and that will be the start of the Kiwi version of Bathurst.

“We will have to come up with a name. It may be the Highlands 500 for example but it is an opportunity to create a signature race for New Zealand that could become as iconic as Bathurst.”

Quinn says the decision to stage a leg of the AGT at his new facility in New Zealand is being used as a test case for the future but he stresses that no decision has been made whether it will become permanent.

“What I want to do is take AGT to NZ once and then take the vote on it. I’m not saying you must and you will and you should at all.

“I’m saying guys come and try it. The freight is free if you are in series.

“We’ll do what we like when we like and we’ll have our race and then race against the Kiwis and just enjoy ourselves.”

As well as the SIES the Highlands Park meeting will also see the maiden outing for the widely anticipated one-make Toyota 86 Series.

“They’ve asked to come but it’s no guarantee. The SuperTourers are the premier category and I’m more than happy to have them here but under our terms,” Quinn said.

Under Quinn’s ownership the AGT has been through some rough patches with a degree of discontent shown by a small number of competitors.

“Last year we had a couple of guys who thought I was running it wrong,” he said.

“It does sadden me to an extent. The competitors in GT are a different bunch of guys and they are all successful businessman and they all want to win.”

Quinn sees a chance to open up GT to accommodate extra classes next year.

“We will open it up next year for GT3 and GT4 and that’s the direction we want to go in. We are only restricted by the willingness of the competitors and the free cash that they have.”