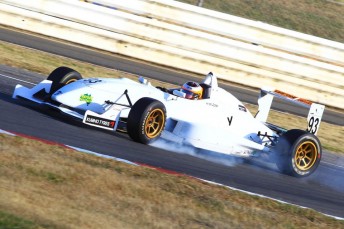 Known officially as the Forpark Australia Formula 3 Scholarship, the scheme awards $50,000 to a young National class competitor voted to have displayed the best combination of race results, engineering feedback and media skills during the season.

Steel Guiliana and Hayden Cooper took out the prize in 2011 and 2012 respectively and will both be among the 16-strong field for this weekend’s season opener at Bathurst, driving Championship class equipment.

“The Forpark Australia Scholarship was the difference between us returning to contest the Gold Star this year, and not,” said the 18-year-old Cooper.

“We have an ambitious plan for this season with a new car and a goal to win the Australian Drivers Championship – but we couldn’t have done it without the support and involvement of Forpark in Australian Formula 3.

“I’ll be aiming to perform at a level that warrants the kind of support they are offering.”