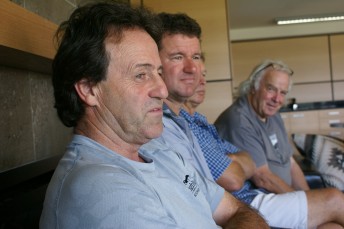 It has taken Tony Quinn 12 months to turn a barren paddock into a cleverly manicured boutique racetrack at Cromwell, near Queenstown.

The path to creating New Zealand’s new motor racing mecca, Highlands Motorsport Park, has come at a cost of upwards of $20million.

Australian businessman Quinn, who also lives part-time in Queenstown, was able to see the grandiose project, which others started almost a decade ago, through to its end-game after taking ownership of the plan early last year.

The can-do Quinn is fiercely proud of his creation which is in his words ‘more than just a racetrack’.

Central to the complex is a 4.5km main circuit and two secondary circuits with the layouts allowing for up to 26 different configurations. The Nose restaurant and wine tasting complex guards the entry where a National Motorsport Museum has been built along with member garages.

Speedcafe.com’s Gordon Lomas sat down with Quinn to explore more detail about the complex which officially opens over the Easter weekend and how it came about. 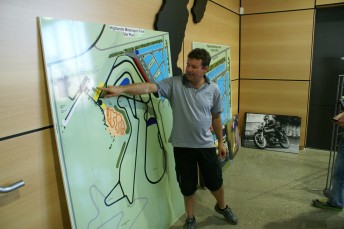 SPEEDCAFE: Tony can you explain how you became involved initially?

Tony Quinn: Grant Aitken (former boss of the Race to the Sky event not far from Cromwell) came to me and said he and his three other partners are building this track. They had spent more than seven years on it but they had run into roadblocks along the way. They first told me the plan was for it to be a members track and I said ‘yep I’m in’. But there was only those four and me and I then said it will never fly in this economic environment. So then we had a meeting and the guys didn’t want to let go of the dream and they didn’t really know who I was. But I said to them if you sell me 100 per cent of it I will build it and build it as quickly as can be done. And that meeting was in January last year. I said if I’m involved I want to own it exclusively because partners don’t work for me.

SPEEDCAFE: So the project from start to finish has been achieved in essentially a 12 month period?

Quinn: It’s just the Kiwi attitude of we can do that. Let’s get some gravel, build a lake and put it there and that will do. My mandate when we started was to use as much local input, labour and materials as we can. That was not simply a marketing-PC ploy. It was because the people I’d met were good people and talked in real numbers. It wasn’t multi-millions. It was kind of two bucks a metre stuff. I claimed it was a warm winter (2012) in Cromwell because there was food on the table and things were good. My plans were to finish it originally by Christmas which for a minute looked possible but it was never going to work. So it’s now ready to open at Easter. 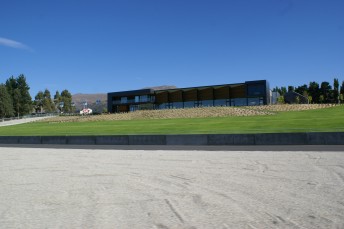 SPEEDCAFE: How many track designs were produced for the site?

Quinn: There were several varying from grandiose tracks to just 6m tar sealed through the paddock. So Klark (Tony’s son) then got onto Google Earth and looked up Watkins Glen, the bus stop at Spa, the Nurburgring and a few corners from other tracks that were special. One of the demands of the southern hemisphere proving ground people was that they wanted a long radius corner and a short radius corner and a skid pan you enter at speed. I said to Klark we need a bridge which we have built and once we had an initial concept we got the GPS points done.

SPEEDCAFE: Was a core goal for the project to make this more than just a racetrack?

Quinn: It was and that was important. We have over a million tourists go to Queenstown every year so if we can get some of those to come through and spent a few bucks in the first year we will be happy. This is not just a racetrack it’s an entire experience.

SPEEDCAFE: How many and what sort of race meetings are planned to stage annually?

Quinn: We plan to have three. I don’t want to take away business from Teretonga (Invercargill) and Ruapuna (Christchurch). I have this vision of there being a Bathurst for New Zealand here. I doubt whether it will be a V8 race. It will be a GT3 event if possible and held in November each year. The other two will be in January when we will have a round of the national series and then at Easter I would like to develop a Classic Goodwood Festival of Speed style event. It would be great to have an event where people could come in period dress and all that kind of stuff. Obviously the tourists will be welcome at the museum and the go-kart track and hot laps around the circuit. We don’t have a tradition to follow or any history to copy. We are not indebted to everybody and we just have to find what works for this facility. 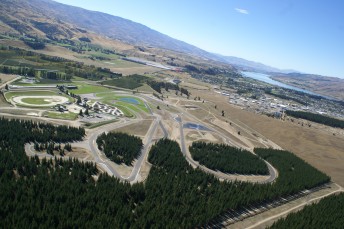 Aerial view of the complex

SPEEDCAFE: So what’s behind you bringing the Australian GT series to Highlands for the final round this year in November?

Quinn: It’s quite simple … it’s going to cost me $100,000 to bring them over but I believe the guys will come back and say that was okay. So I would say we might be able to have a couple of Aussie series here.

SPEEDCAFE: How much are the membership packages?

SPEEDCAFE: Funding a motorsport complex would seem a pretty unusual move for a businessman these days would you agree? 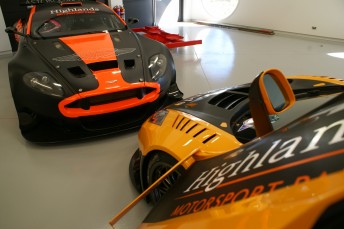 Inside the museum. an Aston Martin sits beside the McLaren MP4-12C

Quinn: Not really when you see successful businessman writing a cheque out for the government, I would say you need to get something out of life.

SPEEDCAFE: This project is $20million or thereabouts but it would have to be at least $100million in Australia. How has that been possible?

Quinn: Primarily because the locals have contributed as I mentioned earlier. And people have said to me there is no way you can do a project like that for that kind of money and my response has always been ‘just watch me.’

SPEEDCAFE: What sort of crowd can the complex accommodate now?

Quinn: We believe that we can fit 4000 on the viewing mound in front of the museum and another 1000 on the berm near the go-kart track and near the pit straight we could get another few thousand people.