Former Australian Rally Champion joins Side By Side Challenge

Former Australian Rally Champion joins Side By Side Challenge 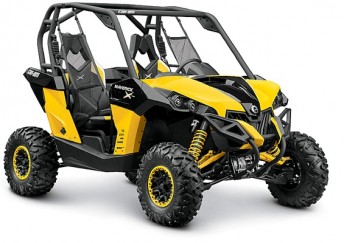 2011 Australian Rally Champion, Justin Dowel, has joined the likes of Cody Crocker and Michael Guest in the Australian Side By Side Rally Challenge, which has its first round at the Quit Forest Rally in Western Australia on 5-7 April.

In its second year, the spectacular SXS Challenge has quickly established itself as a popular addition to the ECB Bull Bars Australian Rally Championship. Dowel will join Michael Guest and Nathan Chivers aboard Can-Am Mavericks.

“The SXS machine is an incredible vehicle to drive – it’s like a motocross bike on four wheels,” said Dowel.

“In all I’ve probably done 300 kilometres of testing in the SXS since Christmas, and it seems to really suit my driving style.

“It’s like a super-aggressive 4WD rally car, with brilliant acceleration and a great power-to-weight ratio.

“It has been built by Neal Bates Motorsport, so we know that it will be up to the task of competing for victory.”

Cody Crocker will once again race for Polaris in an RZR, with further entries from Iain Hughes and Garry Connell.

Starting on Friday night in Busselton, the Quit Forest Rally will see competitors in the Side By Side Challenge contesting 17 stages and a total distance of 187 kilometres over the three days of competition.

Stage lengths vary, from an 850 metre stage around the Nannup Showgrounds on Saturday afternoon, to the 24.04 km Ferndale stage, to be run twice on Saturday.