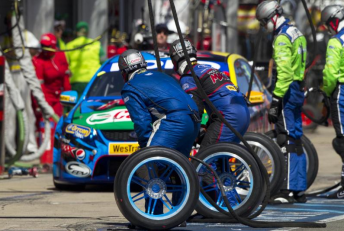 The allocation reduction will place a premium on tyre management

V8 Supercars has reduced the tyre allocation for seven of this year’s remaining championship events in a move estimated to save its teams a combined total of close to $600,000.

The changes come as part of a continued push to cut costs for the teams, which are currently grappling with the knowledge that Racing Entitlement Contract holders will receive no direct income payment from the category this year.

The softer of the two Dunlop control tyre compounds used has been the major scalp of the culling.

The weekend tyre allotments have been reduced by one set for each of the all-soft tyre events at Symmons Plains, Barbagallo, Queensland Raceway, and Winton, while two sets have been slashed from Surfers Paradise.

There will also be four less softs for teams to play with at the mixed-tyre Townsville meeting.

The new Townsville allocation of 12 hards and eight softs matches that of the other mixed tyre hit-out at Hidden Valley, which has been left unaltered.

Four hard tyres have been taken out of the all-hard compound Phillip Island event, while the all-hard meetings at Pukekohe, Austin, Sandown, Bathurst and Homebush remain unchanged.

Combining the latest adjustments with the pre-season scraping of Abu Dhabi from the schedule and other previously made alterations, teams will need to purchase 64 less tyres per car than originally planned.

“The changes save a significant amount of money for the teams without negatively affecting the show,” V8 Supercars Commission member Chris Lambden, who was charged pre-season with working alongside the teams on ways to save money, told Speedcafe.com.

“It’ll put a bit of a premium on intelligent tyre management at a couple of the events.

“We haven’t touched the longer events like Bathurst but certainly some of the sprint races, particularly the ones with the 60/60 format, had a little bit of fat in the original tyre allocation.”

The ’60/60′ or ‘Super Sprint’ format, which will feature two 60km heats separated by a short ‘halftime’ break on the Saturday, will make its debut at Symmons Plains in less than two weeks.

The event will be known as the Tasmania Microsoft Office 365 after a late deal between V8 Supercars and the software giant.