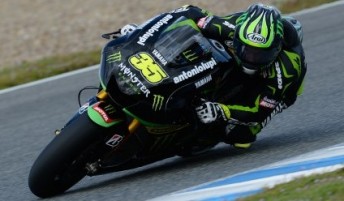 Cal Crurchlow was fastest at the Jerez test

British Yamaha rider Cal Crutchlow has set the fastest time in the final pre-season test for MotoGP at Jerez in Spain.

In a promising sign for Yamaha, Factory Racing duo Valentino Rossi and Jorge Lorenzo were second and third.

Three days of testing in southern Spain brought plenty of rain, although a dryer period in the second half of the final day allowed for slick running. Crutchlow was quickest before being demoted, but returned to the top in the closing stages; his best effort of 1’39.511 was the fastest of the three days in Spain, with Rossi just 14 thousandths of a second slower. In fact, no more than 29 thousandths covered the top three runners.

“We did some decent lap times and in the end we ran quite consistently, I was pleased,” said Crutchlow.

“I feel good. It’s disappointing to manage no more than 70 dry laps over three days, but to be at this pace is good and I think everybody is in a similar boat.”

At Factory Yamaha Racing, the pair of MotoGP World Champions worked with an updated chassis – in contrast with Crutchlow who has had few new components to test over the pre-season period. Breaking into the top three on the final day was LCR Honda MotoGP’s Stefan Bradl, who was fifth overall. The German was one of several riders to hit trouble over the course of the test with a crash on Sunday afternoon. Álvaro Bautista on the Honda Gresini machine also fell on Sunday and was unable to ride on the final day with hand and knee injuries.

At the end of this year’s pre-season period the pack is separated by 2.9 seconds, which compared to last year’s margin brings the pack over a second closer together. The top ten is also more bunched up, with the 2012 gap of 1.3 seconds having now been reduced to 1.1

The 2013 MotoGP season gets underway under lights, with the Grand Prix of Qatar from Thursday 4th April.