Back fracture confirmed for Denny Hamlin

Back fracture confirmed for Denny Hamlin 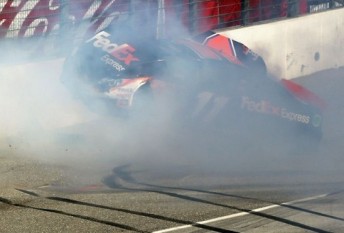 Denny Hamlin slams into the wall at Fontana

Denny Hamlin’s heavy impact with the inside wall after clashing with Joey Logano on the run to the chequered flag at the Auto Club 400, has left the Toyota star with a compression fracture in his lower back.

A compression fracture can occur when a vertebrae in the spine collapses, usually from a vertical shock like Hamlin suffered at Fontana. CLICK HERE for race report.

The injury is similar to that suffered by Australian IndyCar star Will Power in the same multi-car wreck which claimed the life of Dan Wheldon at Las Vegas Motor Speedway in October 2011. Power was cleared to return to the car for a test less than four weeks later.

Hamlin remains in hospital near Auto Club Speedway as he met with doctors to determine the extent of his injury.

Hamlin is stable enough to return home, but Peyton said it is undetermined whether surgery will be needed or whether Hamlin might miss any races.

One thing working in Hamlin’s favour is that NASCAR’s top-tier series does not race on the Easter weekend, with the Sprint Cup resuming on 7 April at Martinsville Speedway.

Back issues are not new for Hamlin, who claims it to be genetic condition as his father also has back issues. He has undergone rehabilitation and injections to try and relieve pain in the past. It’s unclear whether the Fontana injury is connected to or exacerbated by Hamlin’s existing back problems.

The only comment to come from Hamlin directly was via Twitter ”I just want to go home.”