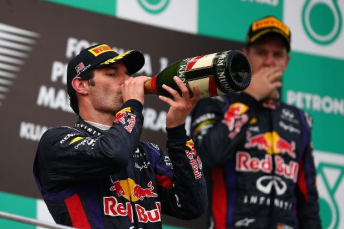 Vettel pauses for thought as Webber turns to the bottle

Sebastian Vettel was left to apologise to Mark Webber after stealing the Malaysian Grand Prix victory from the Australian against the orders of the Red Bull team.

Webber had seized the upper hand from his team-mate at the first round of pitstops, but found himself demoted to second in the final stint after some forceful driving from the German.

Vettel was informed by his team via radio during his victory lap that he “had some explaining to do” after earlier being told that he was being “silly” in attacking Webber.

Webber tersely uttered the phrase “multi 21” – believed to be the squad’s code for holding station – to his rival before the podium ceremony, where the 36-year-old elaborated on his displeasure.

“After the last stop obviously the team told me the race was over, we turned the engines down and we go to the end,” he told interviewer Martin Brundle.

“I want to race as well, but in the end the team made a decision, which we always say before the race is probably how it’s going to be – we look after the tyres, get the car to the end and in the end Seb made his own decisions today and will have protection and that’s the way it goes.

“We know he’s a quick peddler but I was disappointed with the outcome of today’s race.”

Although giving little ground in his own words on the podium, Vettel was quick to apologise publically once in the post-race press conference room.

“I think I did a big mistake today,” he said.

“I think we should have stayed in the positions that we were. I didn’t ignore it (the team order) on purpose but I messed up in that situation and obviously took the lead.

“I can see now he’s upset, but yeah, I want to be honest at least and stick to the truth and apologise.”

“I didn’t mean to ignore the strategy or the call. I made a mistake, simply,” he added.

Webber ended his re-explanation of how his race unfolded in the press conference with the phrase that it was “probably not the best time to talk at the moment”.

“I think it’s very early days right now, it’s very raw, obviously, and we need to work out how the team goes best forwards from here,” he said when queried on the importance of repairing the dynamic within the team following the latest in a series of misunderstandings with Vettel and the team.

“That’s obviously going to be discussed this week. I will be in Australia on my surfboard, the phone won’t be engaged… (we’ll) see what happens.”

Webber also showed his disenchantment when asked if he will think twice about following team orders in future if the situation was reversed.

“I think that question is not going to be answered right now,” he said.

“Let’s just say there were a lot of things going through my mind in the last 15 laps of the Grand Prix, lots of different reasons, not just from today but also from the past.

“We’ll see what happens. We’ve got three weeks before the next race.”

Vettel said that he will remember his wrongdoing in future, but stopped short of saying that he’ll ‘gift’ Webber a win at the next opportunity.

“As I say, if I had the chance to do it again, I wouldn’t do the same but obviously there’s a lot of things that need to come together, to put ourselves in a similar position but yeah, it’s definitely something that will be remembered or should be remembered.”

Adding further to the controversy stirred up by Red Bull, Lewis Hamilton’s third place came after his Mercedes team-mate Nico Rosberg had followed orders to hold station in the final stint.

The season continues in three weeks time with the Chinese Grand Prix in Shanghai.