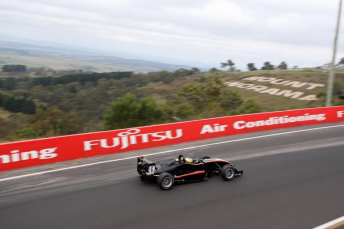 Reigning champion James Winslow will return to Bathurst with BRM

A 16 car field will assemble this weekend for the Formula 3 Australian Drivers’ Championship’s second annual visit to Mount Panorama, Bathurst.

The season opener is expected to be a hotly contested affair with former champions James Winslow and Tim Macrow set to do battle against highly rated rookies Jack Le Brocq and Nick McBride.

As previously reported, the reigning Australian Formula Ford Champion Le Brocq will race under the Erebus Academy banner in a Mygale leased from Harvest Motorsport.

McBride, who is this year competing in V8 Supercars’ Dunlop Series after gaining Formula Ford and Formula 3 experience in Britain, has inked a one-off deal for Bathurst with Astuti Motorsport.

Winslow will be joined in Team BRM Dallara F307s by Jordan Oon, John Magro and a yet-to-be-finalised fourth driver, while the South Australian outfit will also campaign a Mygale for former Carrera Cup runner Nick Foster.

R-Tek Motorsport will too have a strong presence, fielding F307s for Nathan Morcom and Steel Guilinana alongside F304s for Todd Hazelwood and Jon Collins.

Chris Gilmour has stepped out of his own Gilmour Racing operation which has now expanded to two cars in order to field Ben Gersekowski in the Championship Class and South African Arrie Marree in National.

Twelve of the 16 cars have been entered for the full season, which starts with Bathurst and Symmons Plains on back-to-back weekends.