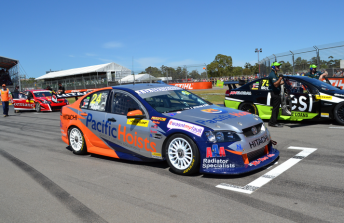 Sydney-based businessman-racer Nandi Kiss says he’s likely to return to the wheel of his Dunlop Series entry for Round 2 at Barbagallo after the departure of Chris Alajajian.

Alajajian drove the squad’s ex-Paul Weel Racing Holden Commodore VE in the Adelaide season-opener, but has since elected to leave the team.

“It’s definitely my plan to get back in the seat if we don’t find a replacement driver by Perth,” said Kiss in a team statement.

“At this stage we haven’t spoken to any drivers about taking the wheel so for the moment I’m re-shuffling my business commitments so that I can give the driving the attention it requires.

“These cars take a strong commitment to fitness and your mental approach needs to be spot on.

“I’ve always enjoyed driving these cars, but I think my longer-term future in the category is as a car owner.

“At least I’ve done all the tracks on this year’s calendar so I have a benchmark to work beyond and with the Kelly Holden engine we put in the car this year that has 40 more horsepower than our old engine program I’m looking forward to better personal results than last year,” he added.

The second round of the Dunlop Series will take place as part of the V8 Supercars Championship’s Chill Perth 360 on May 3-5.

Alajajian sits 21st in the points standings after Adelaide having taken a best result of 20th in Race 2.