Will Power on pole for IndyCar opener

Will Power on pole for IndyCar opener 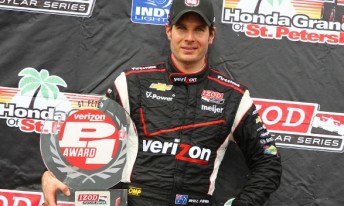 Pole number #4 for Will Power at St Petersburg

Will Power has scored his fourth-straight pole position for the season opening IndyCar race on the streets of St Petersburg in Florida.

While the Toowoomba driver’s form was anticipated, the others at the head of the field did supply some surprises.

“Good start to the year,” said Power after winning his 30th pole.

“I thought qualifying was going to be very tight. It’s very tight on new tyres but we made a few changes for the last run and it was good to see some new people up there.

“It’s always like that in IndyCar. You can never predict what’s going to happen. We don’t know who is going to win, but that is the excitement of it. (We’ve) never had so much depth in the field of drivers.”

“It’s really cool to finally get the results we wanted,” said de Silvestro.

“Thanks to KV Racing Technology for giving me the opportunity. And the whole Nuclear Clean Air Energy campaign to be supporting me after the year we had last year. It’s unbelievable.

Here are the qualifying highlights