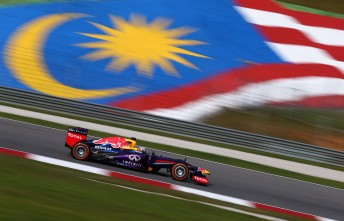 Sebastian Vettel prevailed over Mark Webber in what became a bitter battle of the fast and the furious in the Malaysian Grand Prix.

In a race which will be remembered for Vettel’s curious remarks over the radio, the German took the victory over Webber with Lewis Hamilton third in the Mercedes.

Webber’s only words to Vettel before the podium ceremony was :”Multi 21 Seb” which is believed to be code for hold station and has raised the question that the German may have gone against team orders.

Hamilton’s team-mate Nico Rosberg, frustrated that he was told to hold station behind the Brit, finished fourth ahead of Felipe Massa (Ferrari) and Romain Grosjean (Lotus).

The Red Bull pair had dominated the 56-lap race with the high-speed jousting reaching its climax on lap 43 when Vettel pitted for medium compound tyres.

On the next lap Webber pitted and was launched back into the fight just was the triple World Champion swept past the blend line, leaving the pair to fight out the lead.

In a brilliant piece of resilient driving Webber managed to ward off the attack however on the next lap Vettel made his move after a series of moves and counter moves by the Red Bull pair.

Vettel had complained earlier in the race about holding him up and then again about Webber having the audacity to ‘race’ him.

Red Bull had both its drivers on different tyre strategies but it did not stop the pair from completely dominating the grand prix.

Earlier Vettel pitted for dry tyres on lap six, leading a flood of drivers who also came in for service to replace the intermediates.

By lap 16 Webber, who stayed out for an extra two laps on the intermediates, held sway from Vettel however the Mercedes pair of Hamilton and Rosberg started to make sizeable gains on the pair of Red Bulls.

Webber then pitted on lap 20, handing the lead to Vettel and took on a set of medium compound Pirellis. Vettel pits three laps for hard compound tyres and once he rejoined the running order was the same with the Australian holding the advantage.

Vettel then closed up on Webber with the German saying on his radio: “Mark is too slow get him out of the way. He’s too slow.”

In contrast to Melbourne Webber had a belter of a start from fifth when he launched an attack on the two Ferraris in the first couple of corners.

He squeezed through on a wet track and came out second behind Vettel.

Fernando Alonso emerged with a broken front wing after contact with Vettel after the pair diced through the first couple of corners.

At the start of lap two Webber loomed up beside Alonso who bizarrely stayed out but as Webber eased in front of the Spaniard the front wing of the Ferrari disintegrated causing the double world champion to skid off into the gravel at turn one.

Both of the Force India’s of Adrian Sutil and Paul di Resta were forced into retirement with the team stricken seemingly with wheel nut problems, the first time both cars have failed to finish since Japan in 2010.

Points after 2 of 19 rounds