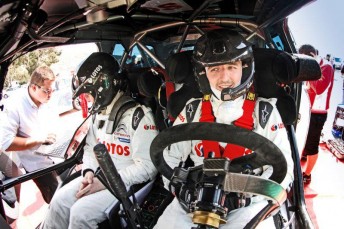 Kubica and Maciek Baran were uninjured in the crash

Robert Kubica has crashed out of his debut in the European Rally Championship while holding a commanding lead in the Rally Islas Canarias El Corte Inglés.

Going into the second and final leg of the event on Gran Canaria with a 66 second lead, the former F1 driver hit trouble approximately 16 kilometres into the 21.36-kilometre San Bartolomé de Tirajana test; the second stage of the day.

A Citroën Racing spokesperson confirmed Kubica broke the left-rear wheel of his Citroën DS3 RRC after striking a barrier on a right-hand corner. Both he and co-driver Maciek Baran were uninjured.

This left Jan Kopecký out front in a Škoda Fabia and the Czech driver made it three-straight on Rally Islas Canarias El Corte Inglés to make it two wins in succession in this year’s ERC. The final margin was 1m52.4s over Craig Breen.

“I have to say it’s good for us and Škoda,” said Kopecký.

“The set-up of this car for the dry conditions is really perfect. Robert was great but he made a mistake.”

Check out the video of the accident